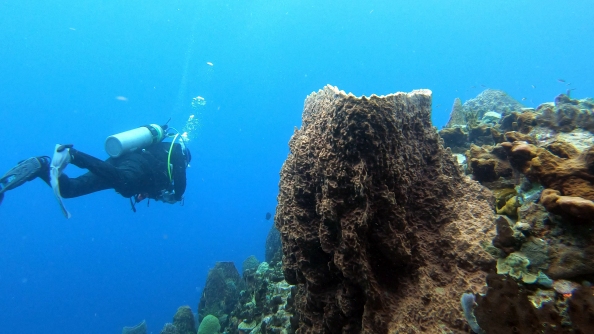 Our second morning on Dominica started at the Fort Young Hotel in the capital city of Roseau. In contrast to the tiny towns of the mountains and east coast, Roseau was bustling with morning traffic, and a cruise ship moored in port promised an influx of visitors. We were lucky to find a parking spot not far from the hotel, and were soon checking in at its small dive shop.

Bonnie and Rachel were signed up for a discover scuba dive course, which would be done right there at the hotel, but Vince and I had opted to join a boat dive. The boat showed up right as we had finished getting our rental gear sorted, so there was no wait at all before we were off. It was a simultaneously sunny and rainy morning and a double rainbow followed all the way to our first dive sight which was off the volcanic shores at the southernmost tip of the island.

We jumped into the water at a site called La Bin, where we dove along a massive coral wall that dropped off into what looked like a bottomless abyss. The reef was covered in giant, bright red barrel sponges, something I’d never encountered before to my memory. I felt compelled to look inside all of the barrel sponges I swam by, just to see if there was anything interesting hanging out inside of them. This yielded a plethora of tube worms and fire worms, a brittle star, and a basket star. I also found two spotted moray eels and a stonefish, but the best find on the dive was a seahorse.

One of the other divers from our boat made the find, and the rest of us took turns getting in close to the reef to see the little creature, which was hanging onto the reef by its tail. Vince and I had just been discussing how we’d never seen a seahorse before right before we left for our trip, so we were both delighted at such an awesome find.

We had a decently long dive despite hanging out at a depth of sixty feet for much of it (your body consumes air faster the deeper you are), and we got to keep exploring a shallower section of the reef that was covered in yellow tube sponges during our five meter safety stop.

Back on the boat, we sat shivering with the three other couples who had joined the dive trip as we waited for an hour to pass so we could get back in the water. One of the other divers had baked banana bread to share with everyone, and she passed it around and we all tried our best to regain some warmth by sitting on the uncovered bow of the dive boat. When it was time to jump back in the water I felt almost warm enough, but I was excited for a second dive despite the cold.

This second dive at Point Denad had the now familiar array if sponges, but we saw more hard coral which was home to schools of tiny fish and even massive king crabs.

Vince and I met back up with Bonnie, Rachel and Jared after our boat returned to the hotel, and the five of us set off on foot to see what Roseau had to offer. We ate lunch at a restaurant called Pearl’s where I ordered a veggie stuffed roti. This was my first roti experience and I was blown away by the perfect combination of spices that filled the wrap.

After lunch, we walked back toward port to try to do some souvenir shopping at the Old Market of Roseau. The market, however, was closed to everyone except cruise passengers so we didn’t get to go inside. Luckily, a few vendors had shops along exterior walls, and we got to pick out some treasures from the backs of their stalls. Bonnie and I each bought hand-braided trivets made of palm fronds.

Next up was a stop at the nearby botanical gardens, which seemed almost redundant in light of the diverse jungle that surrounded the city. The gardens had a variety of interesting trees that aren’t native to Dominica, an enclosure with some of Dominica’s two species of extremely rare parrots, and a dilapidated school bus that was crushed under the weight of a huge baobab tree. The tree fell onto the bus during Hurricane David in 1979, and remains untouched to this day.

That was about enough city exploration for us for one day. It’s hard to stay in town for too long when so much pristine nature is out there waiting for you, so we retreated up into the mountains of Morne Trois Pitons National Park to visit a place we’d been hearing about since we arrived: Trafalgar Falls.

Practically every other foreigner we’d met so far, and most of the locals had asked us if we planned to go see Trafalgar, so we knew it was a popular place to stop, but when we pulled into its huge carpark, there was only one other car in sight. Bright flowers lined the well-paved trail, and little lizards scurried out of our path as we took a short hike uphill through the rainforest. Heavy rain started pelting down on us as we walked, and we waited a few minutes for it to subside, sheltering under some big leaves that hung over the trail.

Sometimes I suffer slightly from the delusion that natural sights that are easy to reach couldn’t possibly be as beautiful as places that require a lot of effort. This misconception melted away as the short hike ended at a lookout deck that lay in front of a towering leaf-covered cliff bordered by cascades of water on either side. The gorge that the twin falls crashed into was so tall that I couldn’t even fit the whole scene into the frame of my camera.

A maze of boulders under the cliff created perfectly inviting pools of cool water, and we eagerly soaked our feet in the water, wishing that we had budgeted more time to explore the boulder field. It was close to sundown, so we couldn’t stay for long, but we all agreed that we would make sure to come back again later in the week.

That evening the caretaker of the Ramelton Estate, Jimmy, and his friend KB came over and made us homemade pizza for dinner. It was KB’s recipe, and we all had a blast rolling up our sleeves and helping prepare the meal together under her expert guidance. We also used some of the herbs from the previous day’s visit with Nicodemus to make a bush tea to go along with dinner, and then we all gathered in the estate’s comfortable living room to devour the delicious pizza.

The next morning, four of us were scheduled to go on a canyoning tour that would involve rappelling, swimming, jumping, and hiking our way through a section of the famous Titou Gorge. Luck was not on side though, and we got an early call from our tour operator, Extreme Dominica, to reschedule our tour for later in the week. It had rained so hard overnight and into the morning that the water levels in the canyon were dangerously high, and we wouldn’t be able to go in that day at all. We did have a free day at the end of our itinerary, so Extreme Dominica rebooked us, which left us suddenly having to find ways to pass a very rainy day.

We made a failed attempt at hiking by driving up to Freshwater Lake, which is the island’s largest lake located 2,500 feet above sea level. Unfortunately, the lake was covered in thick fog and a strong wind sent stinging rain drops into our faces when we tried to get out of the car and hike. Nothing about the situation seemed worth it since there was no view to speak of, so we went a different route and headed downhill to the town of Wotten Waven.

The strong smell of sulphur told us when we were getting close to our destination, and soon we were paying the $10 entrance fee at the Ti Kwen Glo Cho Hot Springs. A long soak in a warm natural pool was the perfect way to spend a cold and rainy day. We picked out some rum drinks, and then relaxed in the warm water for hours as intermittent rain showers poured down on us.

We even saw our first of many land crabs scuttling around near one of the pools.

In the afternoon, Vince and I hiked down a trail back at the Ramelton and found a small waterfall and swimming hole where we took a much colder swim. This still left us with plenty of time to unwind and relax some more at the Ramelton, and we all chattered excitedly about the tour we had coming up the day. There was no way that rain could cancel our plans again because we would be snorkeling at a volcanic reef in the calm Caribbean Sea!