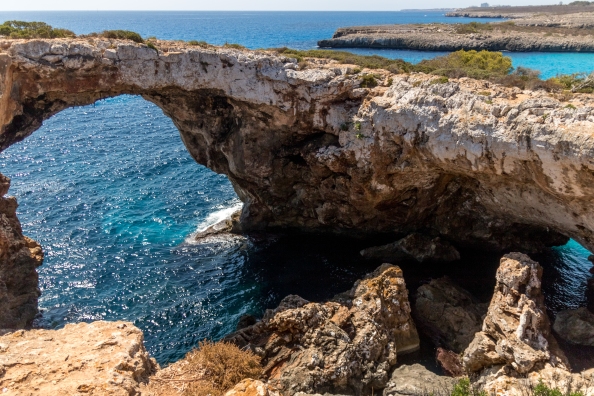 “First you will raise the island of the Sirens,
those creatures who spellbind any man alive,
whoever comes their way. Whoever draws too close,
off guard, and catches the Sirens’ voices in the air —
no sailing home for him.”

David, Caleb, and Courtney were already gone by the time Vince and I awoke to our second day on the idillic island of Mallorca.  They had hired a fishing charter that left early in the morning, and Vince and I had opted for a day at the beach.  Since I’m not one who likes overcrowded and easily accessible beaches, I’d done some research and picked out a spot that looked perfect.

Cala Varques is a beach on the eastern coast of Mallorca that can be reached by a thirty minute hike from the nearest highway.  While it’s not exactly a secret, it is definitely less crowded than the beaches near the bustling city of Palma, and it boasts some picturesque scenery and fun snorkeling spots.

Vince and I arrived at Cala Varques by late morning, which was perfect because it was already extremely hot outside, and we were amongst the first people to make the trek.  We arrived to find the shimmering turquoise waters of the Mediterranean lapping against white sand in a sheltered cove between rocky cliffs.

We walked along one of the cliffs to take a look at our beautiful surroundings before noticing a cave on the opposite side of the bay.  I thought it looked like a great place to set down our towels and backpacks, so we hiked over and staked our claim.  The cave was a great spot because it was removed from the beach were most people seemed to be gathering, and it offered a retreat from the intense sunlight.

The hike down to Cala Varques had been easy, but extremely hot so we donned our snorkels and jumped into the water right after setting out our towels.  The sea was refreshing, and we swam alongside little fish, keeping near the cliff.  Our destination was another cave we had seen from across the bay.

About halfway to the cave, I saw some paws standing on the cliffside, and poked my head up, coming face to face with an adorable dog whose owner was encouraging him to jump into the water.

I gave him a pat before continuing on my way.

Before long we had reached the gaping mouth of the sea cave and we swam inside, marveling at the deep, dark water below us and stalactites hanging from the ceiling above us.

The cave was an exciting place to snorkel, and it made me feel like I was living out some far-fetched mermaid fantasy.  After thoroughly exploring the cave both above and below the water, we swam back to our towels and laid out in the blinding midday sun.

This lasted all of ten minutes before we got bored and decided to hike around on the cliffs to see what we could see.  I knew from prior research that there was a massive rock arch somewhere nearby, so we set off in search of it, stopping to admire the scenery along the way.  The water at Cala Varques was so clear that we could see the shadows of sailboats on the sea floor below where they floated. 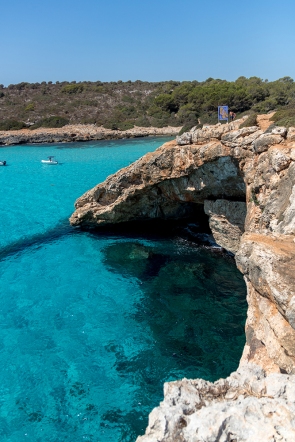 Standing above the cave we snorkeled in 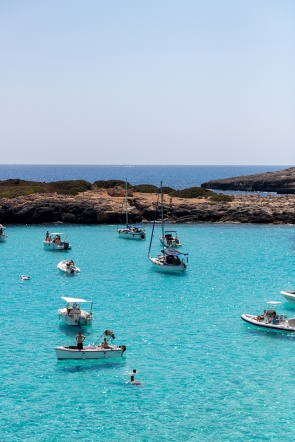 After scurrying up the first cliff, we encountered a second cove that was more secluded than Cala Varques.  A few other beachgoers had set up hammocks in the surrounding trees, but this beach was much more private.

We hiked past the secret beach and up another hill.  From there we could clearly see the arch on the shoreline.  It looked as though it had likely been an even larger sea cave at some point in time, but had suffered a cave-in, producing the interesting rock formation.

All I was thinking about at the moment was taking pictures of the arch and the huge hole in the earth below it.  I walked around the entire area, admiring the view of Cala Varques in the distance.

Little did I know that as I happily snapped away, Vince was forming an entirely different idea.  When I returned to where he was standing I found him wearing the expression he has when he’s set his mind on something adventurey.  I didn’t even have time to ask before he blurted, “Let’s climb down there and snorkel around!”

With a bit of hesitance, I peered over the edge of the cliff at the jagged rocks that lead down to the sea.  I almost protested out of a knee-jerk tendency towards caution, but the climb looked easy enough, and I had to admit the idea of snorkeling under the arch was extremely tempting.  Before I knew it I was sounding my agreement, and the pair of us were scrambling down the rocks into the mysterious cove below.

The arch turned out to be an even more intriguing spot than our original sea cave.  There were many underwater passages to be explored and we got to swim trough tunnels that were created by the cave-in.

It was afternoon by the time we climbed up into the daylight, and we estimated that we should leave in about an hour if we were going to have time to eat before our five o’clock tour of the nearby Drach Caves.  We hiked back to Cala Varques where we took one last swim before starting the trek back to our car.  I picked up a fresh-squeezed lemonade from a little drink stand that had opened up on the beach.  It turned out to be the perfect companion for the scorching hike to the highway.

Drach Caves were only a six minute drive from where we had parked, and we had plenty of time to eat a lunch/dinner before meeting up with David, Caleb, and Courtney at the cave.  I had purchased all of our tickets online in advance, and had read that the five o’clock time slot should be less crowded than the rest of the day.  However as we approached the entrance, we found ourselves in a huge line of other sightseers waiting for the doors to open.  To be fair, we had chosen a weekend during the busy season for our trip, so maybe it isn’t always that busy at five, but in our case it was packed to capacity.

When security opened the gates, the crowd poured into the cave, and we all gaped at the gorgeous stalactites that were illuminated with dim lighting.  The cave was stunning despite being grossly overcrowded.  In particular, I loved the areas where we could see green water pooling at the cave floor. 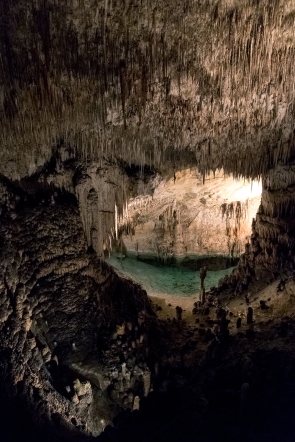 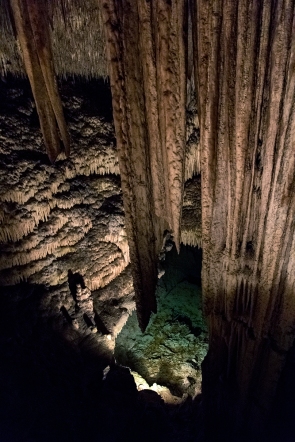 We followed a winding path downward until we arrived at the main attraction: the largest underground lake in Europe.  Some employees directed us into seats in a large amphitheater that had been built into the cavern.  Once everyone had sat down, the lights were dowsed and we were treated to a concert of classical music played by floating musicians.  The small band circled around the lake in a rowboat lit by twinkling lights.  With lights out the small boat was the only thing visible in the cave, and the haunting sounds of the violin echoed around us in the dark.

I have to admit I was expecting to find the concert corny, but instead it left my hairs standing on end and gave me the oddly specific chills that I associate with hearing a particularly beautiful choral arrangement.

After the performance we had the opportunity to board a rowboat that would take us to the end of the cave, but upon seeing how many people were being crammed into the boats, Vince and I decided we would prefer to walk.  This was by far the less popular option which meant we had the pathway to ourselves and could enjoy the sight of the lake without being hurried or jostled.

Back at the surface, I felt grateful to see the sun.  Drach Cave was undoubtedly one of the most beautiful caves I have ever seen, but I was becoming claustrophobic from dealing with the overcrowding of our tour.  It was relieving to have some personal space again.

The end of our tour signified that our time on Mallorca was coming to a close.  It felt bitter sweet because I absolutely love islands and could have happily stayed for a few more days.  On the other hand, I was excited for the rest of our trip, and the next day’s tour of some of Antoni Gaudí’s most famous work.  We went to bed excited that night, knowing that we would be back in Barcelona in less than twelve hours. 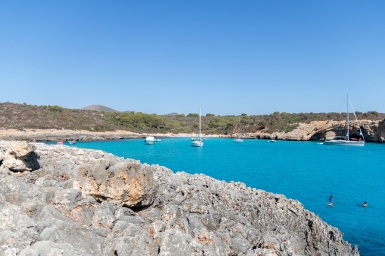 Swimming up to the sea cave 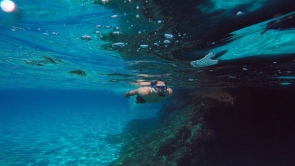 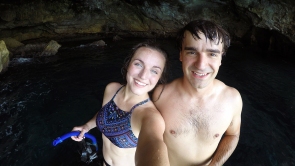 Me and Vince in the sea cave 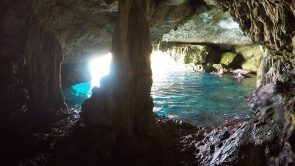 Inside the sea cave 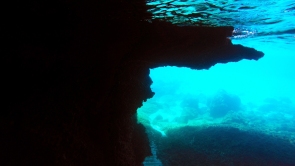 underwater in the cave 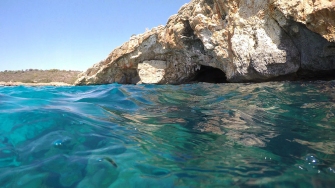 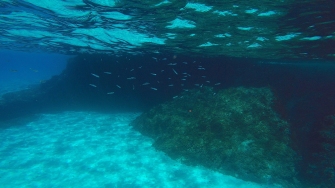 Snorkeling in the Mediterranean 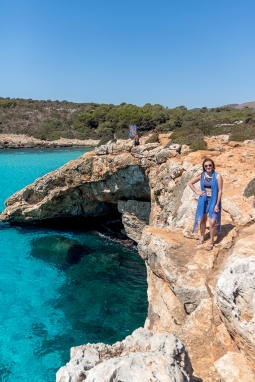 Hiking along the cliffs 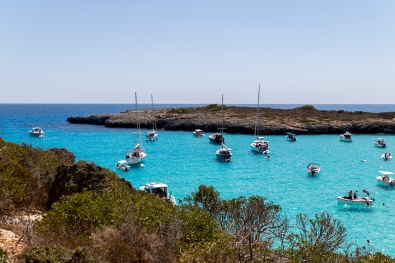 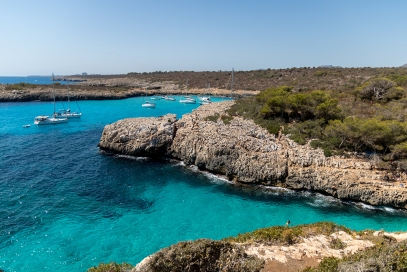 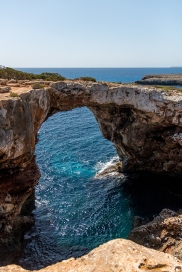 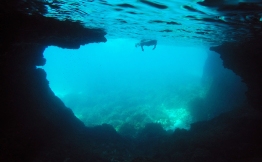 Snorkeling under the rock arch

Snorkeling under the rock arch 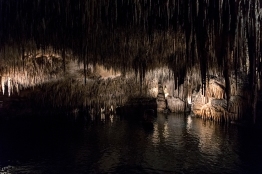 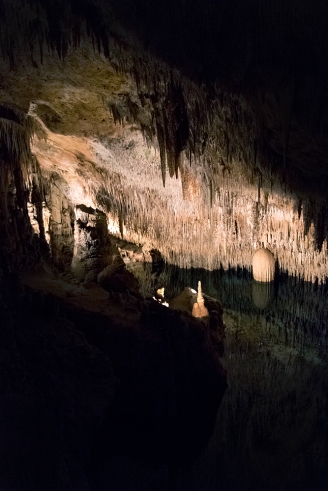