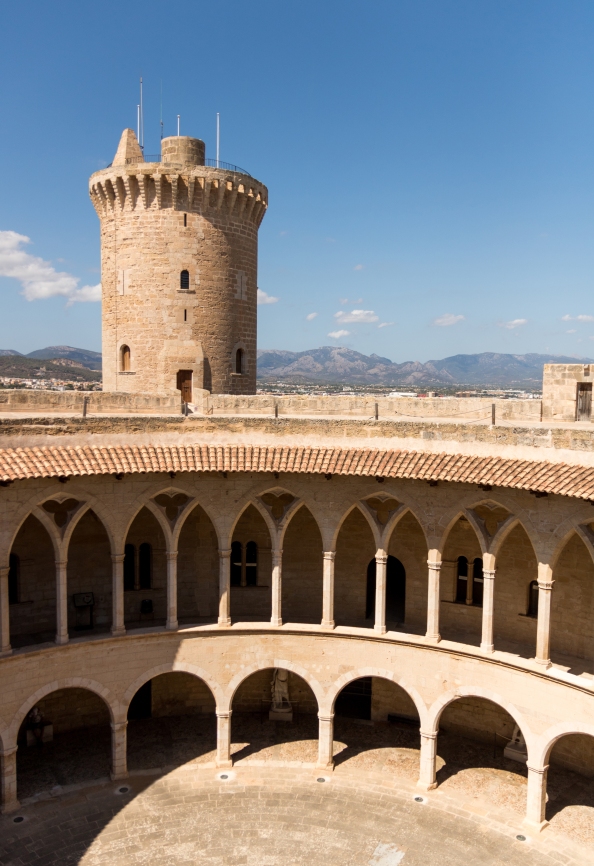 “If you had, suddenly, been where I’ve been
Under the sun among the almond flowers,
If you had dreamed and seen what I have seen—
The old grey olives and the old grey towers;
If, in bewilderment, there had come to you
Over the hills, beneath the evening star,
The tinkling of the sheepbells, or the blue
Gleaming from where the happy wild flowers are;
If you’d been wafted to that fairy-land,
And in delight been lost and lost again,
And walking with me waved a friendly hand
To children smiling with the eyes of Spain,
And in full day beheld the young moon fly—
Then had you sworn the same sweet oath as I!“

Whenever I travel to a new place, I always discover something unexpected.  Even after putting in hours of research and planning, there is bound to be something I didn’t anticipate.  On a recent trip to Barcelona, that surprising something happened within thirty minutes of wandering the city streets.

I was on a sibling vacation in Europe, and we had ventured out of the airport to explore Barcelona’s Gothic Quarter during a long layover.  That evening we would be flying to Mallorca, one of the Balearic Islands, but presently we found ourselves marveling at the intricate architecture of the Barcelona Cathedral.

There was a mass in session so we couldn’t go inside the cathedral.  Instead we wandered the mysterious, narrow streets surrounding the area, poking into gift shops and stopping to look at gargoyles protruding from walls.

I began to notice an odd theme in some of the gift shops.  There were figurines of towers people standing on each other’s shoulders in almost every store.  The stacked people were all dressed in red and white, and the figurines came in a plethora of sizes.  It was a curious site to say the least, but none of us were expecting to round a corner into a large square to find an actual human tower forming before our very eyes.

I later learned that these towers are called “castells” and are traditionally built at festivals in Catalonia and the Balearic Islands.  It was just dumb luck that landed us in Barcelona during one of these festivals, and we watched a few castells being built before we caught a cab back to the airport and boarded our short flight to Mallorca.

It was midnight by the time we arrived at our adorable Airbnb in a quiet little town called Santa Maria del Camí, so we settled in quickly and went to sleep.

The next morning we drove into Palma, Mallorca’s biggest city, and met up at Norway Dive.  We had scheduled a fun dive for me and Vince, and a discover SCUBA dive for David, Caleb and Courtney.  Before we could get started, the discover SCUBA divers had to go over some of the basics and watch a short video, and Vince and I chatted with Jay, a diver from Florida who was working on his advanced open water certification.

Soon, we all piled into the dive shop’s van and we were on our way to the dive site where we geared up and walked into the water from a rocky beach.  Then the dive was underway.  We were hoping to see an octopus, but our hour in the water only yielded a few species of fish and a couple of starfish.

As always, I enjoyed feeling weightless underwater, and I wasn’t ready for the dive to end when we made our safety stop and then surfaced.

After the dive, we grabbed lunch with Jay and agreed to meet up for dinner that evening.  We had a long list of sightseeing to get done before then, so we jumped back into our car and headed for our first stop, Bellver Castle.

This unique castle sits atop a hill that overlooks the Mediterranean, and the city of Palma and the mountains that border it.  Castell de Bellver was built in the 14th century for King James II of Mallorca.  It has been used in a few different ways throughout its history, first as a home for royalty, and later as a military prison.  Now it’s open to the public and admission is only 4€ a person.

There were three different levels of the castle to explore, and inside the walls was a stunning courtyard and a maze of museum exhibits.

My favorite part of the castle was the top floor, where we got an amazing view of the surrounding area as the wind whipped through our hair.

Bellver Castle was a lot of fun, and it would end up being my favorite stop of the day, but after a while we knew we had to move on to Old Palma.

The next item on our list was Banys Arabs, a 10th century bath house.  The baths are the last remnant of Moorish rule on the island.  For only 3€ a person, it was definitely worth stopping in to see the old Roman columns that were repurposed to support the bath house, and to wander the beautiful, lush garden in Banys Arab’s courtyard.

After our brief visit to the baths, we took to the narrow streets of Old Palma and bought some tasty gelato to eat during the short walk to the Palma Cathedral.  The imposing cathedral towered over us as we finished up our ice cream while gawking up at it’s dizzying architecture and gruesome-looking gargoyles.

Construction of the Palma cathedral began in 1229 under the rule of King James I of Aragon, and it was built on the site where a Moorish-era mosque had once stood.  We wandered around the perimeter of the mammoth structure before getting in line to buy tickets.

Once inside, I couldn’t help but gape in utter astonishment.  I have been inside cathedrals in North and South America before, but had never seen one of this magnitude.  The thought that this wasn’t even close to Europe’s grandest cathedral seemed impossible as I studied the intricate vaulted ceilings that were illuminated by the glow of sunlight filtering through stained glass.

We wandered through the cathedral in a somber and awe-filled mood, stopping to light prayer candles along the way.  After circling the entire building at least three times in an attempt to absorb as many details as we could, we stepped back outside into the blinding afternoon sunshine.  Our final stop for the day, the Royal Palace of La Almudaina, was only a few steps away.

There were few other visitors at the palace, which is still the official summer residence of the king of Spain to this day.  Much of the palace was open for us to explore, including a large, open air balcony overlooking the Mediterranean.  The stone interior of the palace was decorated with fascinating, intricate tapestries.

Our visit to the palace was the last stop on the day’s itinerary, so we ambled back to our car in no rush.  It was almost dinner time, so we met up for tapas with Jay in a more modern area of Palma.  We talked and laughed well into the night before retreating back to Santa Maria del Camí for some much-needed sleep.  I was beyond excited for the next day.  Vince and I were planning to go to a beach for a day of hiking, sun bathing and snorkeling, and the others had hired a morning fishing charter.  We planned to meet up in the evening for a tour of Drach Caves, a cave system that contains the largest underground lake in Europe! 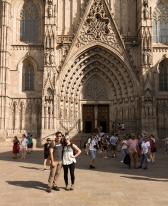 Vince and me at the Barcelona Cathedral

Details of the Barcelona Cathedral 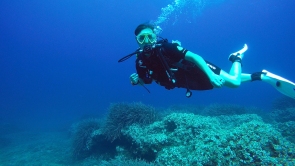 Me diving in Mallorca 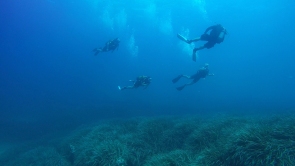 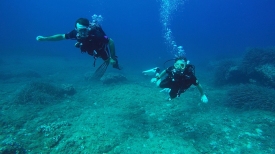 Vince and me diving in Mallorca 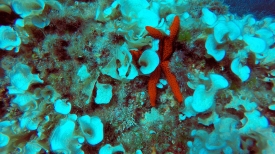 Me at Castell de Bellver 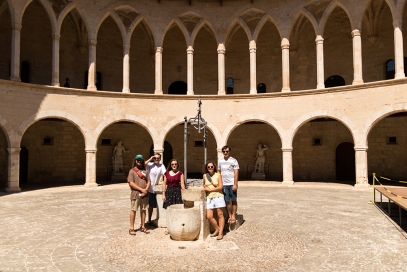 The group at Castell de Bellver 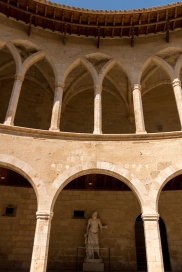 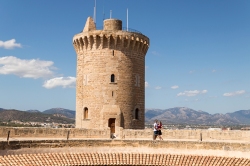 Vince and me at Castell de Bellver

The view of Palma from Castell de Bellver

The gardens of Banys Arabs 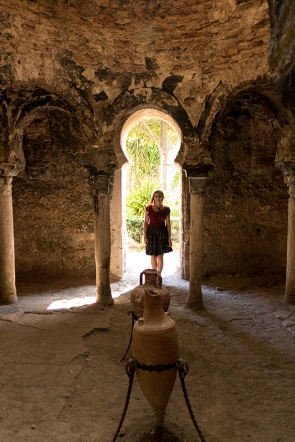 Me at Banys Arabs

Inside the Palma Cathedral