The third day of our Puerto Rico trip was a free day, which meant that everyone could pick from a variety of optional excursions, choose to stay at our resort, or venture off on their own.  Three of our travelers signed up to do a zipline excursion in El Yunque, so Vince and I drove them back to the rainforest in the morning and dropped them off at JungleQui Zipline Park.  We decided not to do the zipline ourselves because we would be going diving on the next free day, and didn’t want to stretch our excursion budget much farther than that.

So after watching Kris, Jess and Diane don all of the gear they would need for their adventure, Vince and I set off in search of some nearby hiking to occupy the next couple of hours.

We ended up stopping at the Angelito Trailhead, and embarked on an easy hike, not entirely sure of what we would find.  The downhill path was lined with tree ferns, which I absolutely love.  The only other place I’ve seen tree ferns was in the rainforests of New Zealand, which had a very different atmosphere from those of Puerto Rico.

The trail was just a little more than a half mile round trip, so we reached the turn around point within fifteen minutes, despite walking at a leisurely pace.  Here we found the trail’s main attraction: Río Mameyes, a wide river dotted with large, smooth boulders.  There were a lot of people swimming in a natural pool near the trail, but Vince and I started heading upstream by hopping around on the boulders. 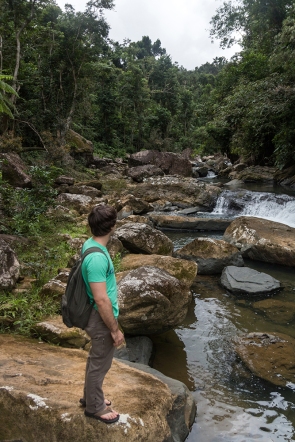 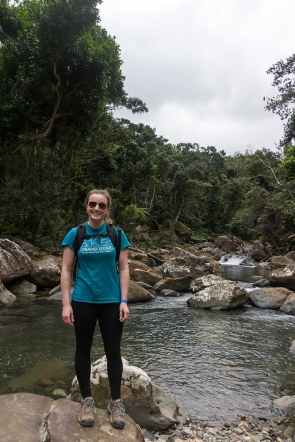 There was a massive boulder underneath a tall, contorted tree in the distance, and we agreed that once we reached it, we should turn around.  Once we finally got to the landmark, we found that it was right next to a small waterfall, so Vince went for a swim while I continued to balance on rocks and take pictures of the area.

In my distraction, I didn’t pay enough attention to where I was walking, and I stepped on a wet rock, which caused me to slip and fall hard.  I was mostly unhurt, but I caught my fall with my right hand, agitating an old climbing injury from this past summer.  With my hand and my pride hurting, I told Vince I was ready to turn back since it was almost time to pick up the zipliners anyway.  At this very moment, the sky broke into a shower of gentle rain.

Now all of the smooth rocks that we had easily walked on before were wet, making them slippery and treacherous.  We still had no choice but to carefully start picking our way downstream, this time using our hands and feet to scramble over the boulders.  I breathed a sigh of relief when we finally reached the trail, and I was standing on dirt instead of slick rocks.

We jogged back up the trail because now we were running late to meet up with the others, and reached the van out of breath.  Luckily, we made it back to JungleQui before Kris, Jess, and Diane did, and we were able to watch their last two zips as they arrived back from their adventure. 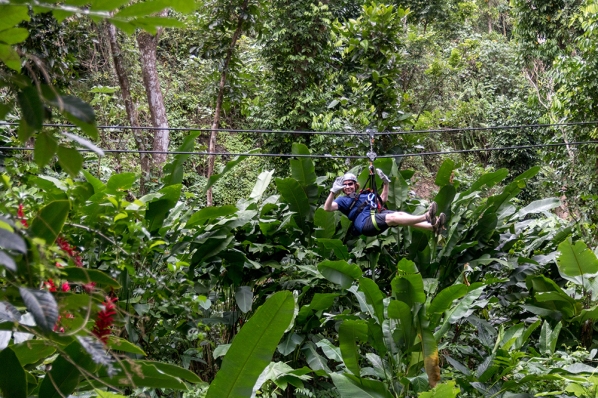 Once they had unharnessed, everyone was able to take a refreshing swim in the nearby river, and make PB&J sandwiches before we left for our next destination.  The three zipliners had been kind enough to agree to accompany me and Vince on an afternoon of sport climbing in Julio Enrique Monagas National Park.

I had chosen this crag because of it’s location, which was about halfway between our resort and the entrance to El Yunque.  Although there is no guidebook for the island, Puerto Rico has a ton of rock climbing routes.  I used Mountain Project to narrow down areas where I might want to climb, and once I had chosen Julio Enrique Monagas Park, eventually settled on a wall called “El Pasillo” because it’s climbs are inside a cave.  I was attracted to the area because the cave would be a good shield from Puerto Rico’s intense sunlight, and because frankly, it looked super awesome.

When you’ve been climbing outdoors long enough there are a few things you learn to expect, and one of them is that directions from guidebooks and Mountain Project are a useful springboard, but often lack clarity, which can easily result in hours of walking around, unable to find the crag you seek.  Because of this, I tagged the nearest landmark to El Pasillo, an observation tour, into Google Maps, and we began hiking uphill.

The park turned out to be a beautiful natural area, despite being right in the middle of a dense city.  Once you drove through the park gates, you were in a forest with a small mountain right at it’s center.  We saw a number of mountain bike trails on our way up to the cliffs, and just when it seemed like we might be lost, we ran into a pair of climbers who pointed us in the direction of El Pasillo.

The cave ended up being the perfect spot to climb, especially since the afternoon sunlight had grown oppressive since we left El Yunque.  It was totally different from anything I’ve climbed before because the rock formations were vertical stalactites that required a lot of different technical moves than I’m used to.  Vince and I started out by both leading a climb called “Root Canal.”

At the top of the climb, I could stem a leg over to the opposite wall of the cave, which I knew would come in handy for photography rigging, although I doubted that I would get to do that.

After Root Canal, Vince decided to try his luck at “Horizontal Limit,” which was a much harder route.  He made it to the top, then I gave it a try on top rope.  this was a good move because the route was overhung and required more strength than I had after injuring my hand back at the river.  After a lot of struggling and falling, I finally made it to the top, collected our gear, and rappelled back to the ground to find that a couple of other climbers from Virginia had joined us.

I was enjoying El Pasillo a lot, and I was eager to try to take some pictures, which didn’t seem possible with only two climbers in the group.  After some discussion, we decided that I would lead an easier route, anchor myself at the top, and then Jess would climb it so I could photograph her.  The route we chose was a 5.8 called “Guabá Man,” and it ended up being a fun climb to cap off the day.  The line followed a wide crack, so I was able to practice some wedging techniques, and I really enjoyed it.

I got to the top quickly, and then set up a static line for myself.  Jess started climbing, and did a great job despite having very little outdoor climbing experience.

Once she had enough, we asked if one of the other climbers would mind lead belaying Vince so I could get some pictures, and he agreed.

Once Vince was done with the climb, I cleaned our gear off of the route, and rappelled back down to earth for the last time that day.  The sun was beginning to set, so we decided to pack up and find some dinner.  We made one last stop to climb the nearby observation tower where we enjoyed a view of the sun starting to set over the city.

We ended the day with dinner at a local restaurant called La Fondita de Leo.  The service and food there were fantastic, and it was my favorite dining experience of the whole trip.  After dinner we drove back to our resort and soaked in the hot tub one last time.  We would be leaving for Fajardo the next day, and our trip would become significantly more beachy. 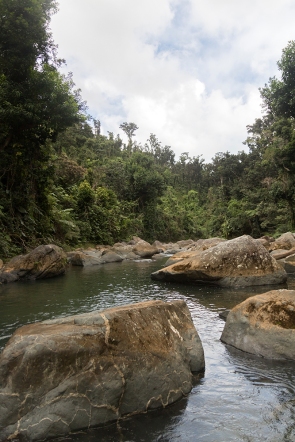