One must-do activity on any trip to Puerto Rico is taking a hike in El Yunque National Forest, the only tropical rainforest in the U.S. National Forest system.  I planned a half-day for exploring the forest with the intention of breaking our large group up into two.  I would lead anyone who wanted to go on a more strenuous  hike, and Jared would lead a group that wanted a more relaxing experience.  Our group ended up almost split down the middle, with five people opting to go with me and three with Jared.

Picking what areas to hike was fairly simple since much of the park is still closed down due to damage from Hurricane Maria.  The storm hit Puerto Rico’s forests very hard, destroying much of the canopy, and making many trails dangerous.  With limited options to choose from, I decided that my group would hike to the lookout tower atop Mt. Britton, and Jared’s group would stay near the Yokahú Tower, and explore some shorter trails.

We dropped off Jared’s group, and drove uphill to reach the Mt. Britton trailhead.  As we ascended, we entered a misty forest where bubbling waterfalls cascaded along the roadside.  It wasn’t easy to find parking for our fifteen passenger van, but Vince made it work and soon we were climbing uphill through the rainforest, surrounding by lush, tropical foliage.

It seems that at least once every trip, my research leads me astray and a hike ends up being significantly harder, or significantly easier than I expected.  In this case it was the latter.  I had read that this trail was rated “strenuous,” but it honestly didn’t even feel that much like exercise to me.  Of course my most recent hiking experiences have all been significantly more mountaineer-ish, so perhaps I have the lack of 30 pounds of gear and heavy, cramponed boots to thank for my ease on this hike.

Once it became clear that this trek would take less than the suggested two hours, we slowed our pace and stopped to look at the different plants that surrounded us.  My mom bent down to examine a plant on the side of the path and asked, “Kait, do you think this is a sensitive plant?”  Now, I don’t claim to be an expert at plant identification.  I am good with animals, but plants are much harder for me.  The sensitive plant (mimosa pudica), is a leafy plant in the pea family, that closes it’s compound leaves when it is touched.  When I was younger, there was a plant seller at our local farmer’s market that sold sensitive plants, and my mom bought them regularly because of their fascinating behavior.  This experience primed me to touch any plant in the pea family that I found anywhere I’ve gone for some fifteen odd years.  Never in all of my travels, have I successfully found a sensitive plant.

I began to warn my mom that it probably wasn’t a sensitive plant, but she was already brushing a leaf with her fingertips.  To my utter astonishment, the leaf folded.  I stood there gaping at it for a few moments, then sprung into action, camera ready to document the momentous occasion.

By this time we were almost to the lookout tower at the peak of Mt. Britton, and we had already stumbled upon some amazing scenery.

From there, we walked up a last uphill push, and found ourselves at the base of Mt. Britton Tower, with the surrounding hills shrouded in mist.

We knew we wouldn’t see much of the view with so many clouds engulfing it, but we climbed to the top of the tower anyway where we were met with a gratifying, cool breeze.  It was quite windy, and within a few minutes, the clouds had blown away, revealing some of the spectacular landscape below us.

After we climbed back down the tower, we retraced our steps downhill as the sky threatened to break into rain.  We were almost back to the van when it finally started to pour on us, but the rain cleared up within twenty minutes when we were ready start another hike.

We had more time than I thought we would, so we stopped along the roadside at the trailhead for Juan Diego Falls.  Another short hike up a gentle slope led us to a double-tiered waterfall with a pool beneath it.

Vince and I waded into the chilly water and stood beneath the falls, feeling refreshed.  Back on dry land, I found an anole, and it actually stood still long enough for me to take a picture (most of the lizards we encountered scampered away before we could even get a good look at them).

Vince and I dried off, and we all returned to the van so we could meet up with the rest of the group at Yokahú Tower.  We climbed the tower, where we could see for miles in every direction.

Afterwards, the entire group gathered together for one last stop at La Coca Falls, which is right along the side of the road.  This was by far the most beautiful waterfall we saw on our trip.  It’s flat, black stone face stood in contrast to the vibrant foliage surrounding it.

We scrambled around on the rocks near the waterfall, and then returned to the van where I reflected on our experience in El Yunque.  I thought it was interesting how many people book guided tours of the forest.  While I was researching for our trip, I noticed that many companies offer guided hikes for prices in the $100 range.  I thought this was different because I have always self-guided in national parks before, so I opted to do the same in El Yunque.  I think the guided tours are probably good for people who are in Puerto Rico as a cruise stop and don’t have their own transportation, but the park was very approachable and easy to navigate, so I was glad that we did it ourselves.

After our day in the rainforest, we headed straight for Old San Juan, where I had booked us a sunset cruise.  After boarding our boat for the hour-long tour, we headed out into San Juan Bay, but it quickly became clear that something was off.  The captain began attempting to steer us back to the pier, and eventually admitted that something was wrong with the wheel and he was unable to steer the boat.  The guides dropped us back off at the pier, and offered us either a full refund, or tickets for the next evening.  Since we couldn’t fit the cruise into our itinerary for the next day, I asked for the refund and then I let the group have some free time in Old San Juan.

We got to see more of the beautiful, colonial city as we walked to a restaurant to eat dinner together.  After dinner, we split up to do some shopping before meeting back at the pier and heading back to our hotel.  We all soaked in the hot tub to unwind, then went to bed to prepare for an early morning. 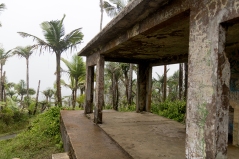 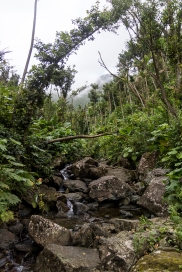 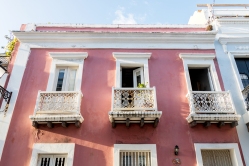