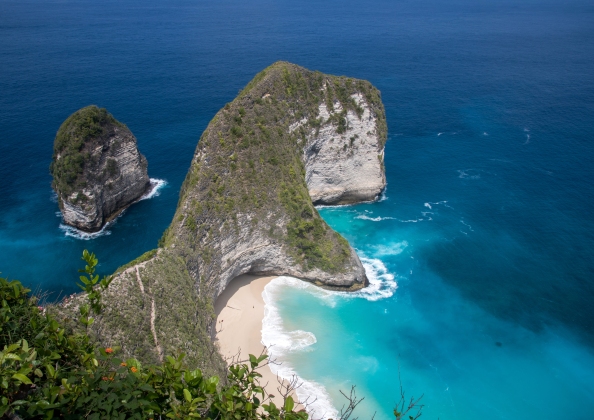 We woke up early with a handful of missions on our second day on Nusa Penida:

After eating a delicious banana pancake on the porch of our bungalow, we coated ourselves in sunscreen and hit the road, our destination: the first place we could find that offered manta ray tours.  This didn’t turn out to take a particularly large amount of searching.  We found a spot before we even made it into town and booked a tour with them for the next morning.  They also agreed to arrange us a taxi since we would be checking out of our bungalow and wouldn’t have the scooter anymore.

With our serious business out of the way we began the journey to Angel’s Billabong.  This is an almost absurdly famous spot that is on most must-see lists for Nusa Penida, and I knew it was best to go around low tide when it is more visible.  I had also read that you can swim in the natural pool at low tide, so we were prepared to float in the crystal clear water.

According to our GPS, the drive to Angel’s Billabong would take around an hour, and for most of the route this seemed like a fair estimate.  We wound our way up to the top of a mountain, where we had sweeping views of hills covered in sun-soaked banana trees.  Intricate temples lined the roadside, and the morning sun cast a heavenly glow on the countryside.

The morning was perfectly idyllic.  And then we arrived at the unpaved part of the route.  Countless blogs, other travelers, and locals had warned us about the state of the roads leading to Angel’s Billabong and the other attractions on the south side of the island, but I’ll be honest and admit that I had sort of thought they were all exaggerating.  The road to Thousand Island Viewpoint hadn’t been as bad as everyone made it out to be (after our minor fall), so I thought these roads would be fine too.  I was wrong.  What followed was an interminable, painfully bumpy expedition that had me eager to never sit on the back of a scooter again (a wish that would not be granted since our trip had three more days of scootering scheduled).  Our only relief from the treacherous drive was a short stop to buy bananas from a woman who was selling them on the side of the road so far away from any civilization that I had to wonder how she had gotten there.  We also stopped for me to gawk at a couple of blue-tailed bee-eaters, which arguably made the entire drive worth it right then and there (but my opinion is undoubtedly skewed by a borderline unreasonable love of birds).

The road got worse from there, but we were only a few minutes away from Angel’s Billabong at that point.  We had to pay 10,000 IDR (about 70 cents) for parking once we reached our destination.  This is fairly standard throughout Nusa Penida and Lombok.  We parked the bike, and applied more sunscreen before following a trail to the viewpoints.  Angel’s Billabong is right next to another popular spot called Broken Beach, and that was what we came upon first.

We moved on from here quickly, but resolved to walk over the archway on our way back.  The main path led us down a hill and through a desolate looking area made up of jagged volcanic rock.  It was scorching hot out and I was looking forward to cooling off in the waters of Angel’s Billabong, but when we got there we noticed a man sitting up on the cliff making sure that nobody got in the water.  Later we found out that there had recently been some accidents in the pool, and we assumed that was what caused it to be closed to swimmers.

Although I had initially wanted to swim, I wasn’t disappointed upon actually examining Angel’s Billabong.  This stunning rock formation is a natural infinity pool that has an array of beautiful colors at it’s bottom, but the jagged floor of the feature looks like it would be painful on your feet and probably unpleasant for swimming.

We spent a little time wandering around the area after seeing the main attractions, but soon a crowd began to form, and we decided to get back on the road.  While Broken Beach and Angel’s Billabong were unique and beautiful, I’m not sure that they deserve quite the amount of fame and fanfare that they get, especially when compared to other spectacular sights on Penida.

Back at the scooter, we mapped out a route to Kelingking, and prepared for another hour’s ride.  The drive was less peaceful this time around as all of the day tour vans had made it to the south side of the island by late morning.  The narrow roads were crowded with vehicles, making driving slow and tedious.  By the time we made it to Kelingking and stumbled off of the scooter, I could have hugged the ground.

Luckily this leg of the journey was decidedly worth the effort.  We walked up to the edge of the sea cliff, and saw the impressive rock formation that is said to look like a T-Rex.

Then we saw a huge line of people waiting to walk down one of the most sketchy looking trails I have ever seen.  Of course, we were going to walk down the trail to the inviting beach below, but I suddenly felt extremely under-prepared.  Much like my underestimation of the road conditions, the hill at Atuh Beach had lulled me into a false sense of security.  I had read blogs that called it a difficult hike, and ended up thinking they were exaggeratory.  The same bloggers had described Kelinking in nearly the same way, so I assumed I would be fine wearing flowing pants and sandals.  Again, I was wrong, but I was determined to do the trek anyways so we joined the queue of people waiting at the top of the cliff.

As we waited I noticed a family of Macaques sitting on a nearby shrine and got distracted taking photos, much to the chagrin of Vince, who didn’t want to lose our place in line.  I have a lot of love for monkeys ever since my first experience seeing wild ones in Peru last summer, so I thought they were adorable.  None of my family is in agreement with me however, and they’ve all remarked on how ugly the Macaques are when I’ve shown them photos.

Eventually Vince managed to talk me into leaving the Macaques, and we began our descent down to Kelingking Beach.  The path was only wide enough for one person to be walking in most places, so there was a lot of stop-and-go to let people through.  We stopped to take in the view about halfway down, then pressed on as the path grew more and more vertical.  The trail had hand rails that were made of bamboo held together only by bright blue rope.

By the time we finally made it to the beach, I was feeling a little shaky, but I was so happy to dig my toes into the soft sand of Kelingking Beach.  There were less people at the bottom of the cliff than there had been at the top, which didn’t surprise me.  Kelinking is the perfect place for the ambitious beach-goer, but not so great for someone who just wants a relaxing day in the sun.

Personally, I thought the hike was worth every step.  The beach was pristine, and the towering cliffs formed a fortress around us that made the area feel secret and secluded, despite how famous it is.

We spent more time here than we normally do at beaches.  The waves were massive and kind of intimidating, which Vince loved, and I tolerated until I got caught in one so big that Vince had to hold onto me to keep me from getting smashed onto the shore.  All-in-all we had a great time, and looking back I would say this was my single favorite spot on Nusa Penida.

After about an hour or so we started to get restless, so we started our hike back up the cliff despite not really having a plan for the remainder of the day.  The trek up, was actually easier than the descent had been since the trail was so steep that it was more like a really easy rock climb than a hike.  We had to stop to let people pass us on their way down quite a bit, so I busted out my camera and took more pictures of the view.

We arrived at the top of the cliff sweaty and hungry, so we picked one of various nearby snack stands and sat down for some food and to discuss plans for the rest of the day, eventually agreeing to visit Peguyangan Waterfall.

This of course required another long drive on the worst roads yet, but we made it without any problems (aside from encountering speed bumps which really made no sense since the only way to get through those roads was at a snail’s pace).

Peguyangan Waterfall, in true Nusa Penida fashion, lies at the base of a sea cliff.  It can be reached by hiking down a steep set of bright blue, dubiously constructed stairs.  The waterfall is also home to a Hindu Temple, so we rented a couple of sarongs at the top of the cliff, and began hiking down.  This turned out to be a peaceful walk, and we only encountered a few other tourists along the way.  It also provided a constant view of rugged cliffs meeting the crashing waves below.

After a long descent, the bottom of the cliff was finally in sight.

At the bottom of the stairs, we saw the waterfall cascading over a cliff and into the ocean.  The temple was built onto the top of the waterfall, and consisted of a series of shrines and pools.  On the far side of all of this was a shorter staircase that led down to a pool where bathing was allowed.  We were hot and sweaty from our hike so we gladly took a refreshing dip in the pool before beginning the climb back up the stairs.

The climb was the most strenuous one yet, but it had been well worth it to get to visit such a unique spot that was more off-the-beaten-path than anything else we’d done on Penida.  This was decidedly my favorite day on the island, and I was very glad that we had opted to self-drive instead of taking a guided tour.  It was a lot of fun to wander around the island at our own pace, and make some decisions on the fly.

I wasn’t quite ready to leave Nusa Penida the following day, but we didn’t need to be to the Denpasar airport until early evening so we planned to take the latest fast boat back to Bali.  We still had a manta ray snorkel to look forward to before saying goodbye to Penida!

The steps to Peguyangan Waterfall

A crustacean in one of the pools at Peguyangan 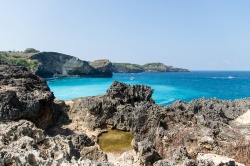 Traffic jam on the Kelingking trail

The steps to Peguyangan Waterfall 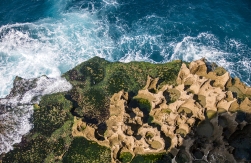 A view near Angel’s Billabong