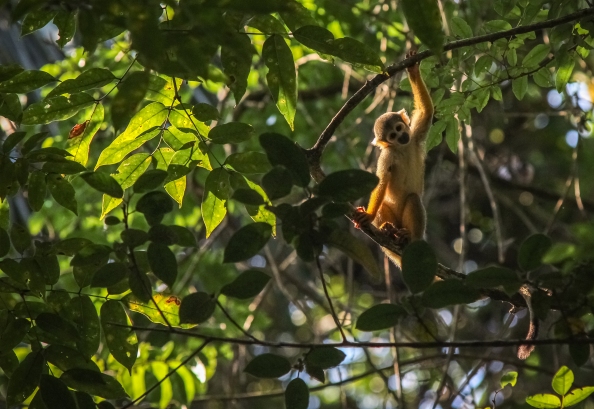 Our first day at the Tapiche Reserve started at four in the morning, which really didn’t feel bad at all after turning in early with the sounds of the jungle to lull us to sleep.  By four thirty, we were in the dining room, and Verdi was handing out bowls of oatmeal for first breakfast.

Katoo let us take our time waking up and getting down to the dock, but soon we were floating down the Tapiche River in one of the reserve’s boats, stopping at beaches to check for turtle eggs along the way.

Katoo steered the boat toward the bank of the river across from the reserve and gave us some instructions about hiking through the jungle before we got out.  He told us to walk as quietly as possible, and said to stop walking if he did so that he could listen for animals.  It didn’t take long for us to start hearing the animals he was talking about.  Right away, we could hear the eerie roars of howler monkeys echoing from the tree tops.  Katoo estimated that they were about three kilometers away from us.

During the first part of the morning, Katoo showed us a lot of small things that we should look out for on our hikes.  For instance, he pointed out a tree that had no vines growing on it.  The tree was inhabited by a colony of fire ants, who meticulously maintain their homes, keeping any other foliage from growing on them.  He also pointed out a gigantic ant called a bullet ant.  These are highly venomous, and Katoo told us about undergoing his bullet ant ceremony while growing up in the Brazilian Amazon.  Another tiny, but terrifying swarm of creatures we found on our hike were some small beetles.  Katoo said that he had once been blinded for two months when one of these shot venom into his eyes.

We stopped for second breakfast near a lagoon, and ate to the sound of Horned Screamers worrying about our presence.  When we got back on the trail, Katoo was determined to find some mammals.  He listened very carefully, and we began to notice what he was listening for.  Every so often, some leaves would rustle up in the trees, indicating that there were monkeys nearby.  They were heading away from us, across a small stream, and we followed Katoo off the trail in pursuit of them.  We did manage to get some glimpses of squirrel monkeys, but by this time we were far away from the trail, and needed to head back.

Unfortunately it seemed nobody really remembered how to get to the trail.  We walked around for about twenty minutes before Katoo asked us to wait by some walking trees so he could get his bearings.

While we waited, we joked about the situation and inspected an armored centipede.

Soon, Katoo returned and he had figured out how to get back to the trail.  We sluggishly made our way back.  Walking without a trail was clumsy and slow in our gumboots, and we had to contend with ducking between vines that grew from the canopy all the way to the ground.

When we finally made it to the trail, it seemed that the monkeys had been there waiting for us all along.  There were some crashing sounds in the treetops, and before I could even register what was happing, we were running after them until we found a spot with incredible views.  We managed to see a howler monkey, a capuchin (not pictured), and a whole band of squirrel monkeys. I had a really cool moment in which a squirrel monkey looked straight at me, tilting its head as if it were as fascinated with me as I was with it. 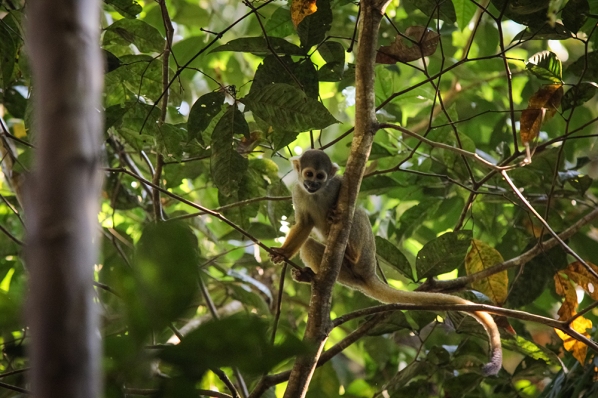 Satisfied that we had seen enough mammals for the day, Katoo led us back to the boat, and we returned to the reserve to eat lunch and relax for a bit.  In the evening we went back out on the boat in search of more turtle eggs.  We didn’t have much luck with that, but we did get to watch river dolphins surfacing as the sun set in the background.  We also came across some massive caiman tracks on one of the beaches.

Once the sun set, Katoo steered the boat to the edge of the reserve and turned off the engine.  We floated back under the stars, and we all got to know each other a little better through some great, and somewhat difficult conversation about the threats that face the jungle.  Just as we were arriving at the dock, it started to rain (the only rain we would see during our time at Tapiche).  We ran back to our rooms, and turned in for the night.  The next morning would be early again. 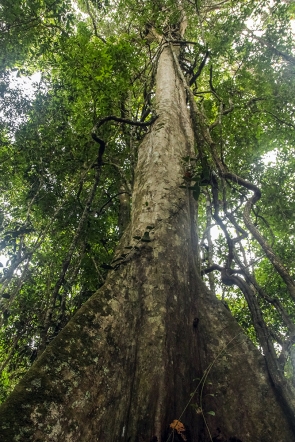 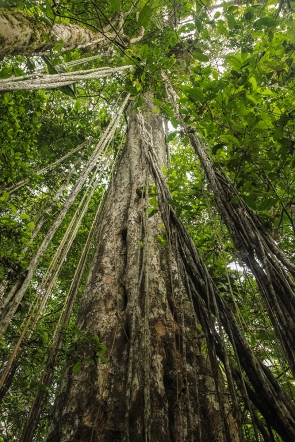 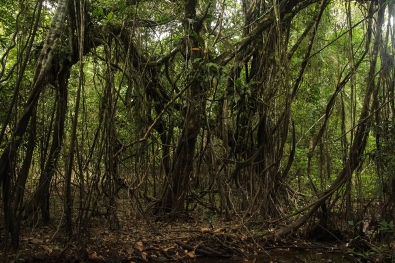