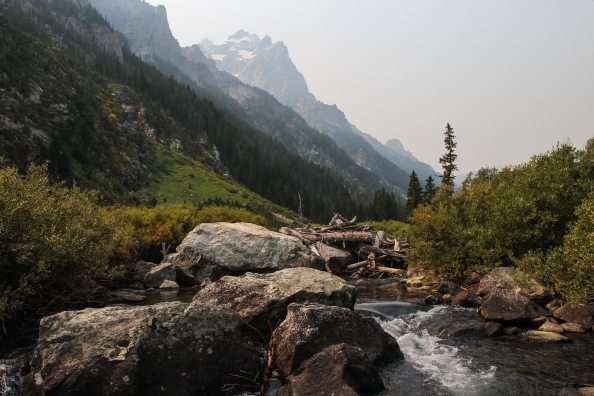 “If you have ever stood at Jenny Lake and looked across to Cascade Canyon weaving its sinuous way toward the summit of the Tetons, you will know the joy of being in a sacred place, designed by God to be protected forever.”

Our second day in Grand Teton National Park began back at Jenny Lake as we waited for the ferry that would transport us to the Cascade Canyon trailhead.  We arrived at the dock early because we knew there would be a limited amount of time to spend before the final ferry left at five pm.  If we missed the last boat, we would have to hike around the lake to get back to the parking lot and our RV.  Muted morning light filtered through the hazy sky as the ferry sped toward the trailheads on the far side of the lake.

We set out on the Cascade Canyon Trail which led uphill through a deep forest.  Tall conifers towered above us, blocking any view of the surrounding mountains.  The trail was steep, and did not have many switchbacks.  It was by far the most strenuous section of trail that we tackled that day.  Still, it wasn’t unmanageable, and it didn’t feel like long before we ascended above the tree line to be met with a glorious mountain view.

At this point the trail leveled out, and our pace quickened.  We arrived at Inspiration Point by late morning and dug into our packs, eating an early lunch as we admired the view of Jenny Lake, now far below us.  As we ate we gazed at the lake, and the surrounding peaks, spotting a group of hikers heading toward a summit across the valley from us.

After lunch we were back on the trail, moving fast now that we were no longer gaining elevation.  The path dipped back into a forest, this time following alongside a river, which we could see from varying distances as we walked.  I was lagging behind, as I often do when I’m taking pictures, when I heard a shout from my family up ahead.  At first I didn’t know what was causing the commotion, but then I heard the word “bear,” and I was suddenly at full attention.  My immediate thought was run toward them.  After the initial surge of excitement, I tried to quell this knee-jerk reaction and act sensibly.  Running towards bears is, after all, not the safest of activities.  I slowed down and approached the rest of the group cautiously.  The bear in question turned out to be a young black bear.  It was walking across a rock on the other side of the river, and seemed utterly ambivalent to our presence.

Only a few seconds passed before it disappeared into the forest, and we assumed that we had seen the last of it.  We continued our hike, chatting about the excellent sighting, but were soon stopped dead in our tracks.  Not twenty yards ahead of us, the little bear was walking on the trail, heading in the same direction as us.  It had apparently crossed the river, opting for an easier hike along the flat trail.  My brother David kept his hand on our can of bear spray, and Caleb continuously made noise to keep the bear moving away from us.

By this time, the ruckus was attracting other hikers.  Everyone was either rushing to avoid the bear, or to get a closer look.  Our group stayed somewhere in the middle through all this, trying to continue our hike without infringing on the animal’s personal space.  It was apparent that the little bear was opting to use the trail because it was easier than crashing around through the forest’s underbrush, and it didn’t seem agitated by the hikers, although it was keeping its distance.  Still, we kept a watchful eye on the situation, just in case anything changed.  Eventually the trail opened up to a heavenly valley.  Cascade Creek remained to our left, and a large rock scramble led up to jagged cliffs on our right.  Now the bear opted to walk in the rock scramble, climbing among the jagged boulders and eventually disappearing from view.

Once the bear was out of sight, the crowd of hikers dissipated, and we were able to once again enjoy the beautiful trail at our own pace, and with a little more privacy.  We were surrounded by some of the most picturesque mountains I have ever seen, and I walked slowly, absorbing each breathtaking moment.

My brothers stopped at a beach at the side of the creek to cast their fly-rods.  I removed my shoes and dipped my hot and aching feet into the refreshing, icy water.  Vince and my dad started to hatch a plan to swim in the river (I have rarely seen either of them pass on an opportunity to go swimming, no matter how cold the water is), and before I knew it, they were wading out toward a large boulder.  The water was deeper on the far side of the rock, and they jumped in before they could change their minds.

As they were running back toward shore, yelling about how cold the water was, I heard someone up on the trail shout, “Bear!”

I turned just in time to see the little black bear from before once again hiking on the trail.  It was very close to me this time, and I let it pass by before moving from my perch on top of a small boulder.  My last glimpse of the bear was of it disappearing into the forest up ahead, quickly followed by a couple of hikers hurrying to get out of its path.

Once he had dried off, my dad borrowed a fishing pole from my brothers and managed to snag a small brook trout, which he released after I snagged a couple of photos.

At this point, we had let a fair amount of time slip past us, and we knew that we had to turn around if we were going to make it to the dock before the last ferry.  We hiked back at different paces, Vince and I keeping up a brisk walk in the hopes of adding a stop at hidden falls.

We made excellent time back to the trailhead, and opted to go for the shorter hike to the waterfall, which was well-worth the effort.

We would have loved to spend more time at the impressive waterfall, but we had to get back, so we retraced our steps to the dock where David and Courtney were already waiting in line.  My parents and Caleb made it back in time too, and we began to discuss evening plans.  It was decided that we would stop at the park visitor center, then drive to Jackson Lake to watch the sunset behind the mountains, but the sun was already going down by the time we made it out of the visitor center.  The sky was awash with a fiery orange, accentuated by the smokey haze. We ended up stopping at a pull off along the road to admire the splendor.

When we did finally make it to Jackson Lake, we were surprised to find that the mountains had completely disappeared behind the thick haze.  The stop wasn’t wasted, however.  We made our own fun, enjoying each other’s company and throwing rocks into the lake, which was glowing the same orange hue as the darkening sky.

By now, we had worked up an appetite, so we decided on a nearby restaurant, where we saw the last bit of the sun, now a bright fuchsia, sinking behind the shadowed outline of a periwinkle peak.

The next morning was the end of our time in the Tetons.  We stopped at the park entrance to get a picture with the sign, and admire one last view of the gorgeous mountains.