I was fast asleep in the rented RV when my dad’s voice shattered my early morning slumber. Normally I would think he was joking, but there was a certain urgent lilt in his voice that told me he was absolutely serious and there was indeed a moose in our campground. I wasn’t the only one that heard the announcement. My brothers and our significant others were all awake now too, and we were frantically searching for footwear and jackets to protect us from the brisk morning air. We were organized and moving at a pace that the five of us are only able to muster when a wildlife sighting is on the line.

Within minutes I was traipsing alongside my family through knee-high sage grass in a pair of slippers. As we grew closer to the looming shadow that lurked on the edge of the campground, we noticed that he wasn’t alone.

There were three bull moose and one cow. The males were all working hard to rub the velvet off their antlers, but the largest of the three had clearly found the most success. We observed from a safe distance as the three bulls all vied for the attention of the cow, who seemed utterly disinterested in the lot of them.

We watched the drama play out for a long time until eventually the behemoths decided to lumber toward the ever-growing crowd of onlookers that had gathered to gawk at them.  Many of the spectators were unfazed, but we were not of the inclination to take chances when it came to counting on a 1,000 pound wild animal to be even-tempered.  We had a full agenda for the day anyway, so we returned to the RV to change out of our pajamas. 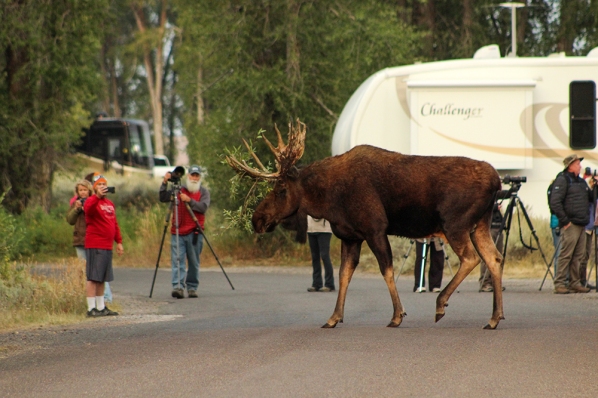 We changed and made the short drive to our first stop of the morning, Mormon Row, a collection of historic homesteads with an unobstructed view of the Teton range.  We wandered around the old farmhouses and barns as late morning sunshine warmed the air, casting a golden glow on the dried sage grass.  The sky was hazy from the smoke of far off forest fires, so we did not get a crisp view of the mountains, but the morning was beautiful nonetheless. 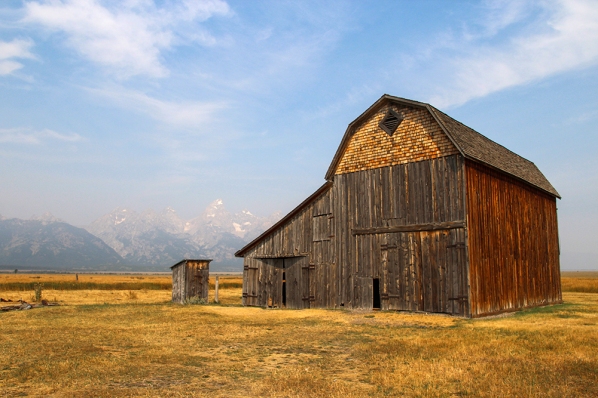 Mountain bluebirds swooped and dove through the air, stopping to land on purple thistles for mere seconds at a time.

We spent the better part of the morning exploring the buildings, admiring the mountains, and wondering what it would have been like to be homesteaders in the Tetons.

After thoroughly exploring Mormon Row, we stopped in the town of Jackson and picked up some information about the Jackson Hole Mountain Resort.  We only had two full days in the park, so we were looking for a fast way to get up into the mountains.  The ski area has an aerial tram that carries passengers up to a summit where there are hiking trails and panoramic views of the neighboring peaks.

We purchased tickets and boarded the tram, which took us on a smooth and quick journey to the summit.  The view from the top was breathtaking.  We were above much of the haze and could see for miles in every direction.

We hiked down one of the trails a ways, and eventually we met a family that was returning from their longer hike.  They mentioned spotting a badger just a little further down the trail, so we went to investigate.  Instead of a badger, we found a couple of little marmots who eyed us wearily from rocky outcroppings.

We explored the mountaintop until the last tram was about to depart.  By then, the day was coming to an end.  After a quick dinner in the RV, we drove to Jenny Lake where the guys all went for an icy swim while we watched the sun set behind the mountains.

Prints from this post are available for purchase in my Etsy store! 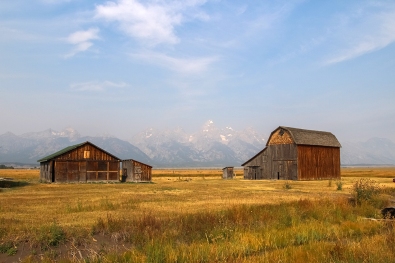 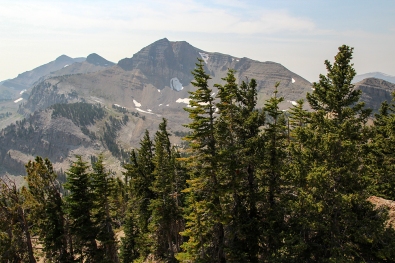 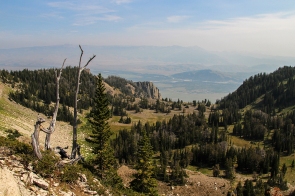 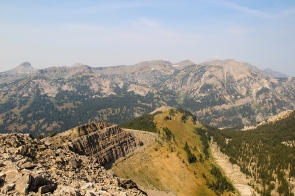