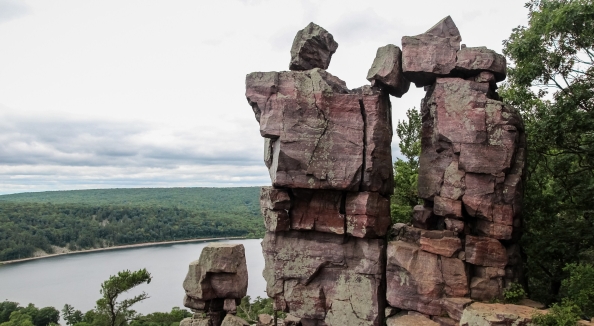 Originally the plan was to spend a weekend climbing at the Red River Gorge, but With the weather forecast in Kentucky looking bleak, our climbing group made a last minute decision to head west instead of south and found ourselves in Wisconsin for the weekend.  Although I absolutely love climbing in the Red, it simply cannot beat Devil’s Lake for picturesque views, so the change of plans was a welcome one.

There is however, a problem that comes with trying to plan a trip to Devil’s Lake.  Last minute reservations at campgrounds in the area can be impossible to find.  That is how we found ourselves crashing into our tent at a place called the Double K-D Ranch.  This was not your run-of-the-mill state park campground.  It was more of a vacation community with permanent campsites outfitted with everything from travel trailers to mobile homes, and an area designated for tent camping.

Our first night at the ranch was uneventful.  We went straight to bed and were on the trail in Devil’s Lake State Park early the next morning.  We headed straight for an area called Cleo’s Amphitheater, where we set up a couple of ropes and spent the day climbing.

Eventually we were rained out, but it was late enough in the day that we were all starting to get hungry so we turned tail back to the campground to cook dinner.  We sat around the fire for a bit as a few members of the group retreated to their tents to get some sleep. Those of us still awake made the decision to head over to the campground’s bar to see what it was like.

At first we really didn’t know what to make of it.  It was small, and a group of people were gathered inside enjoying each other’s company.  They were friendly, and we sat down to have a drink.  It wasn’t long after that the evening took an unexpected turn.

It started when one of the bar’s patrons mentioned a ten foot hula hoop.  He asked if we wanted to see it, to which we readily agreed, and soon we were hula hooping to our heart’s content.  Soon after that, the campground’s owner approached us with a serious look on her face.  We were sure we were in trouble for being too loud, but when she spoke, she said, “Anybody who doesn’t bounce in the bouncy house is going to be kicked out of camp immediately.”

She pointed to a looming shape in the shadows outside of the bar, and sure enough, there was a bouncy house.  At that point, we took off running.  Apparently you don’t have to ask us twice to play in a bounce house.  We bounced for a while before going back into the bar where we sang karaoke and danced along with the regular patrons.  The night only got stranger from there, when Vince rode along in a golf cart to wake up our sleeping friends and drag them to the bar.  Eventually we found ourselves on peddle boats in the middle of a pond, and the guys all went swimming.  Overall, the night felt a lot like a dream, with every event being upstaged by the next, and we were still laughing about it the next morning as we packed up camp, vowing to always stay at the ranch when we climb in Devil’s Lake.

As always, we made sure to grab a hike before hitting the road.  We went back to the state park and took the very steep hike up the East Bluff on the Balanced Rock Trail.  At the top of the bluff, we stopped at Devil’s Doorway, an impressive rock formation, to enjoy the view and do some bouldering.  Afterwards we hit the road, headed home once again.