Last week’s post was a bit heavy, but I am happy to say that the long weekend only got better after the debacle at Lions Head.

We camped at the Cyprus Lake Campground in Bruce Peninsula National Park on Saturday and Sunday night.  This location was a perfect spot to begin our day hikes along the Canadian shore of Lake Huron.  On Saturday, the group split in half, a few members returning to Lions Head, and the rest of us bound for the Grotto, one of the main attractions in the National Park.  The trail led us through a forested area before spitting us out on a short cliff overlooking Indian Head Cove, one of the most beautiful beaches I have ever seen (although I can’t say that it had Whitehaven Beach beat).

The shore was comprised of stark, white rocks which baked in the hot sun, contrasting with the Caribbean hues of the lake.  The water looked all too inviting on the summery morning, but its temperature was cold enough to make your bones ache.

Naturally, our group quickly went off the beaten path and began climbing our way along the cliff face, stopping to enjoy the sights as we went.

We made our way west because we knew that the Grotto would be in that direction.  The traverse was fun and easy, made complicated only by my backpack full of camera gear which altered my balance.  Soon we came to a small sea cave with a hole in the top that opened up to the cliff above.  We overheard some people saying that this was the Grotto, but I knew better and we continued on, grabbing the ample hand holds and stepping carefully on the slippery stone.

It didn’t take long to get to the Grotto from here.  We knew we were there because there were suddenly staggering numbers of hikers on the rocks above us.  We climbed to the top, and got our first glimpse of the opening to the sea cave.  It was massive, and I was glad that we hadn’t been fooled by the much smaller cave that we already passed.

Once we were above the Grotto, we hopped around the rocks until we found a good place to once again descend to the base of the cliff where we could enter the cave.  On the way in we stepped past a lethargic watersnake.

The Grotto was impressive.  Inside, the turquoise water turned to a deep, rich blue, and we could see an opening underwater that led back out to Lake Huron.

Some members of the group elected to boulder around the edge of the cave, but I chose to skip that, unwilling to risk falling into the unbearably cold water.

After the Grotto, we ate a quick lunch as a red squirrel lurked around nearby, hoping to snag some of our trail mix. 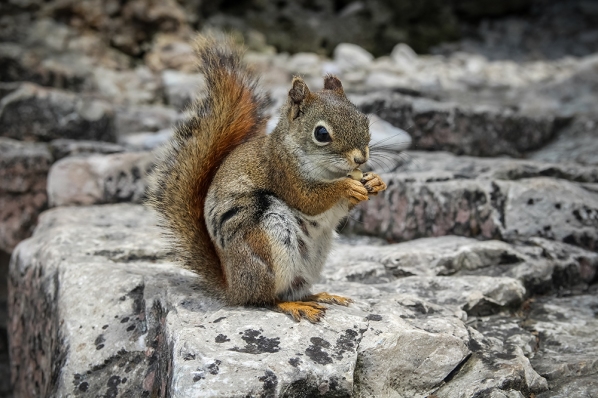 Then we unfolded our trail map, and decided to push on toward boulder beach.  We mistakingly thought that this would be a good location for bouldering, but it turned out to be a beach that was full of rocks, more stone sized than boulder sized.

We continued westward from here, and did find a spot along the shoreline that was perfect for bouldering.  There were no other hikers here, so we had the entire place to ourselves and quickly got to work exploring the area and climbing what we could with only our hiking boots.  We liked this area so much that we decided to return the next morning with our climbing shoes and crash pad.

It was getting late, and we were getting hungry, so we trekked back toward the campground, stopping to see the rock arch from above.

The next morning, we broke camp and hiked back to the bouldering area.  This time we had our shoes, although we elected to send the crash pad home with the other group members, who were leaving earlier than us.

The hike to the bouldering area was much faster this time because we made a point of avoiding our normal tendency toward distraction.  We spent the morning climbing around on the rocks, which were easy enough to feel safe without the crash pad, but challenging enough to still be fun. 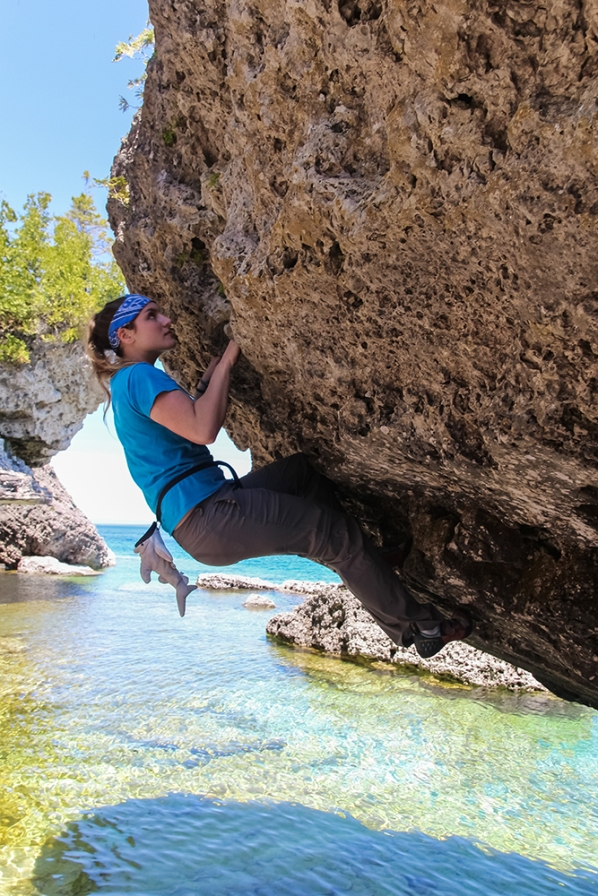 Although we, didn’t want to admit it, it was soon late enough that we should be hitting the road.  We had a six hour drive ahead of us (and that didn’t account for the inevitable stops at Tim Horton’s that were sure to slow us down).

We didn’t rush on the hike out.  In fact, we got distracted chasing frogs while crossing a river, and made a point of avoiding bridges and opting to hop across rocks when we came to waterways.

Overall the trip was enjoyable, regardless of the near disaster that was the first day.  For me, this makes yet another awesome experience in Canada, which is one of my favorite countries I’ve visited, despite it being so close to home.  Since the area is so beautiful, and there is still a multitude of places we want to explore on Bruce Peninsula, I have a feeling we will be back in Ontario very soon. 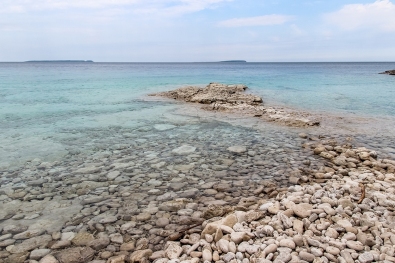 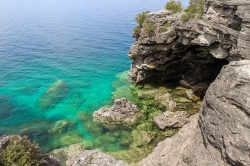 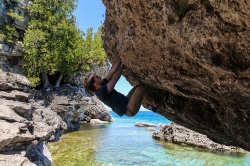 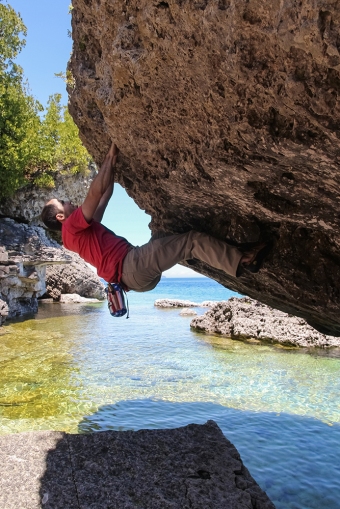