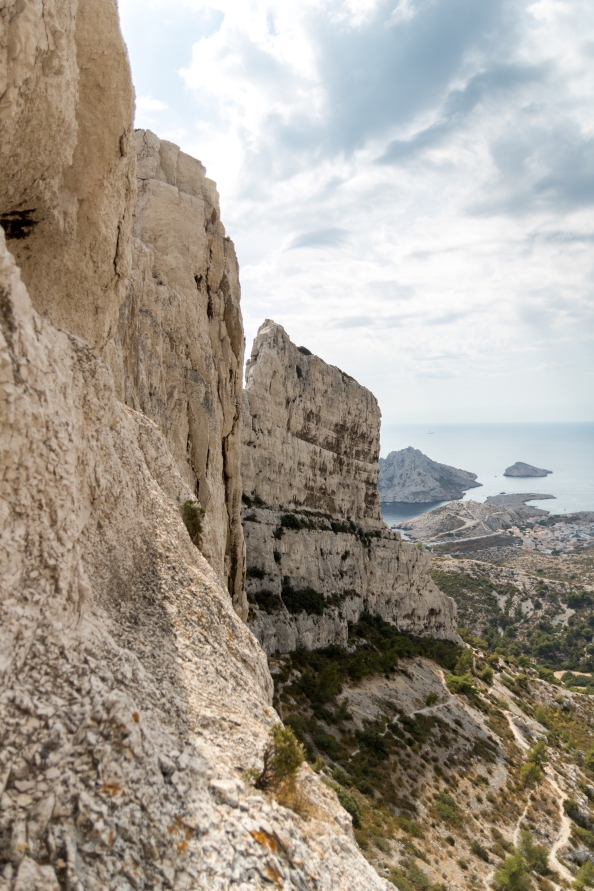 Vince leaned over and whispered in my ear, “It’s Anglais.”

Before I had a chance to be too embarrassed, the park ranger I was addressing said, “Yes, I do,” in a standard English accent.

Relieved, I pointed to a trailhead in the near distance and asked, “Is that the trail up to the Pas de la Demi-Lune?”

He said it was, and quickly produced a map of Calanques National Park.  Although the map didn’t show the trail we needed, I felt confident that we would be able to find our way.  After all, we could see our destination towering over the small fishing village of Les Goudes.  How hard could it be to get there? 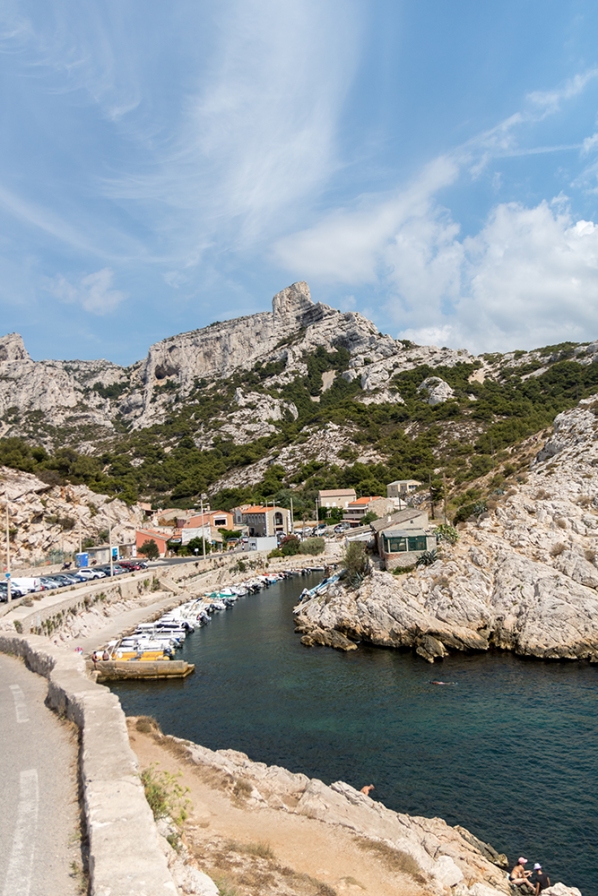 As we walked toward the trailhead, the ranger called after us to check that we had brought water, and we assured him that we had.  I hadn’t put my normal amount of research into this hike for a couple of reasons.  I didn’t really think we would actually get around to doing it because we only had a day in Marseilles, and I also found it difficult to get information about the Calanques that I could fully understand because almost everything was in French (I know, how inconsiderate).  I had read that the hike should take about and hour, so we’d brought a couple liters of water and half a baguette that we’d picked up at a bakery that morning.  That seemed sufficient for an hour of hiking so we set off, me feigning confidence that I knew where we were going, and Vince implicitly trusting that I’d done thorough preparations.

We crested the first hill of the trail with ease and I felt reaffirmed that this would be a short, easy hike, remarking to Vince that I thought we were already getting close to the top. 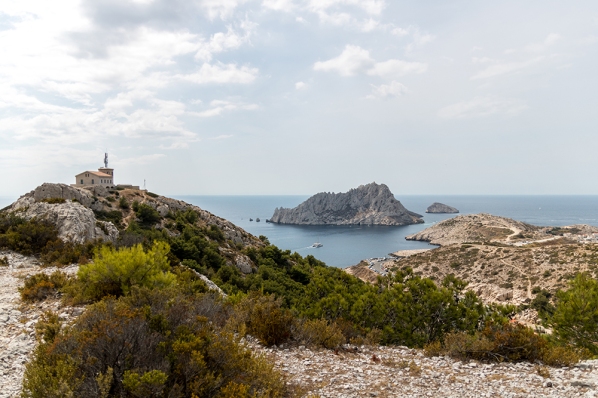 We had been following yellow spray painted trails markers, although we had no compelling reason to believe that they would bring us to the Demi-Lune.  It still felt better to be following markings of some sort, so we stuck with yellow which led us around to the other side of the Demi-Lune.

The landscape here was unlike anything I’d ever seen.  White hills with scraggly vegetation met the sea and sprawled before us toward the horizon.

I still wasn’t sure if we were going the right way, but I certainly couldn’t complain about the view.

We hiked onward for a while, sweating in the intense afternoon heat.  Our time estimate of an hour was obviously incorrect, and Vince started to realize that I had no idea where the trail would lead.

“Are you sure you know where we’re going?” he asked with a hint of incredulity sneaking into his voice.

“No,” I admitted, “But we’re definitely more than half way there.”

He gave me a pointed look and said, “How can you be sure we’re over halfway there if when you have no idea where we are?”

I knew it was contradictory, but I was still confident that we could find our way to the summit if we just kept walking.  Vince was less enthusiastic to operate under this logic, so I pointed out that we could walk half as far as we thought we could make it and then turn around if we still couldn’t find the right trail.  He begrudgingly agreed, although I could tell that he had no confidence that we would end up in the right place.

I’m aware of where it probably sounds like this story is headed.  Two hikers set off into unfamiliar terrain without an accurate map, a good plan, and probably not enough water.  Stories like this don’t always have happy endings.  In this case though, we got lucky, and the trail we were following eventually intersected with another one that was clearly marked “Pas de la Demi-Lune.”

Finally I knew we were on the right track.  All that stood between us and our destination was a laborious uphill slog in the oppressive summer heat.  By this point Vince had lost all faith in me, and I could tell he wanted to turn back, but now I was absolutely sure that we were in the home stretch so I convinced him to push on just little bit further.

The effort paid off when we summited the steep hill and stepped onto a “U” shaped hole in the mountain. 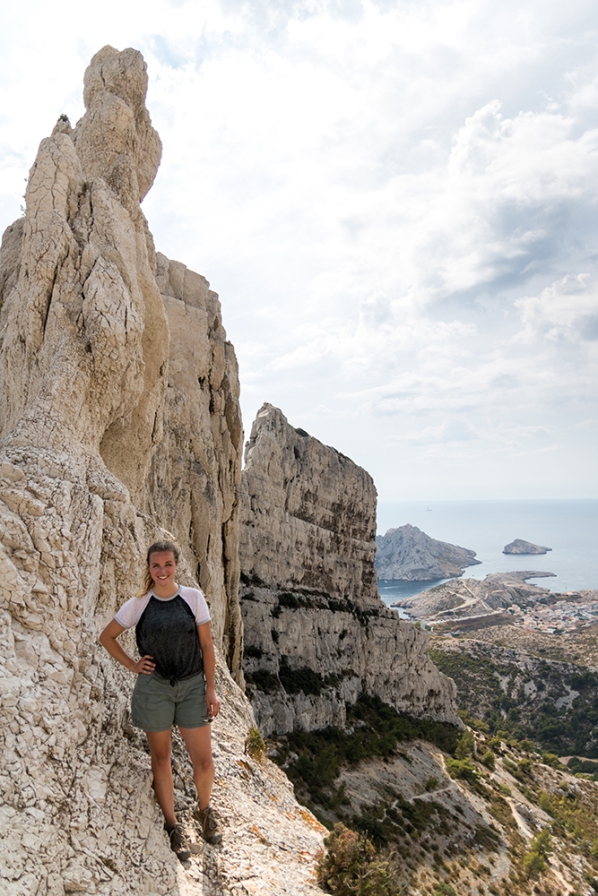 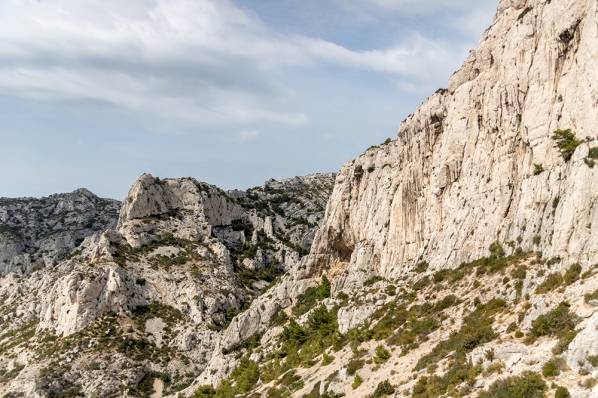 The peak we’d been hiking towards was actually a long, narrow section of cliff that circled around a valley like a natural amphitheater.  There was a thin section of trail that hugged the inside of the convex rock formation.  Only a couple feet of solid ground stood between us and a sheer drop-off to the valley below.  The area was very exposed and felt precarious and exciting as we carefully stepped around to admire the unique view of the cliffs with the Mediterranean in the background.

Now that we had actually reached our destination, we both breathed a sigh of relief.  We knew how to get back from here, we still had plenty of water left, and the view from the top of the hike was so spectacular that it had definitely been worth putting in a little more effort than we’d anticipated.  What’s more, for the first time on the trip, we were completely alone.  We shared some peaceful, quiet moments, appreciating the silence and the gentle breeze that cooled our hot skin.

The hike back to Les Goudes felt like it took no time at all, and before long we were back in the bustle of Marseille where we had a nice dinner as we watched the sun set over the sea. 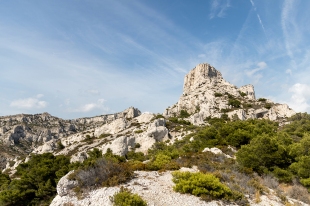 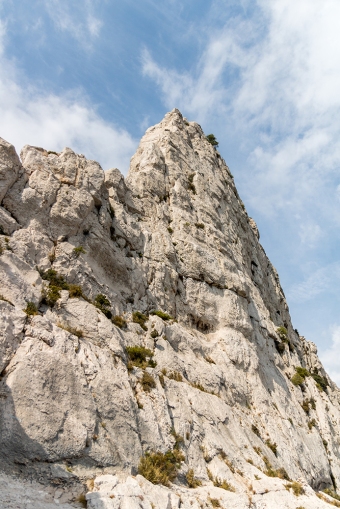 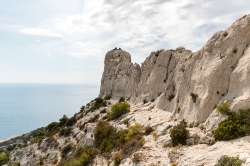 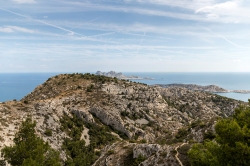 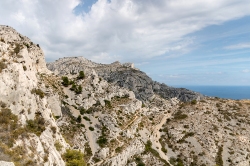 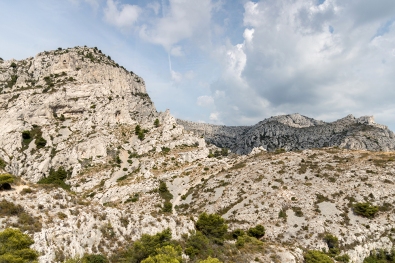 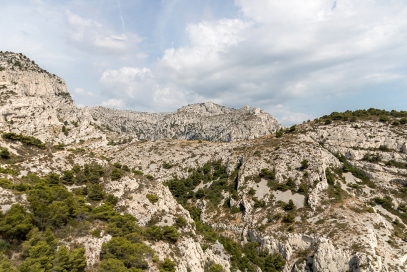 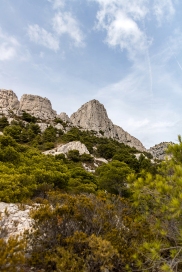 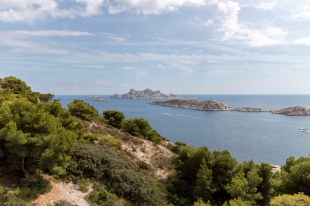 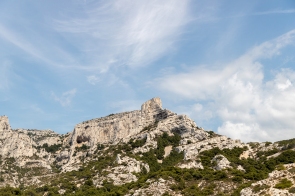 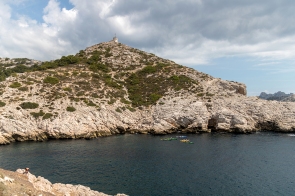