“It seems no work of Man’s creative hand,
by labour wrought as wavering fancy planned;
But from the rock as if by magic grown,
eternal, silent, beautiful, alone!”

Oppressive and inescapable heat bore down on me as I took lethargic steps through the towering Siq, wondering how many more twists and turns I’d have to hike before I’d finally see the treasury of the stone city of Petra. In my mind, a war was waging between feelings of excitement and exhaustion. I had spent much of the previous night hugging the toilet, and it was clear I had contracted some sort of bacteria that was making me sick. In the light of day, my stomach cramps had subsided, but I was weak and extremely tired. Every step I took seemed to take twice as much effort as it should, a problem that was exacerbated by the sweltering 114-degree (Fahrenheit) heat. Still I was eager to finally lay eyes on the beautiful, rose-colored city. It was amongst the sights I was most anticipating on our trip to Egypt and Jordan, and I wasn’t about to miss out on it because of illness.

Vince encouraged my to keep chugging uncomfortable amounts of water as we trod past smaller ruins and into a deep, shaded canyon. Every few minutes, we would hear the clipping of horses hooves warning that a carriage would soon appear around some bend, and we would hug the wall to let them pass.

A carriage barreling through the Siq 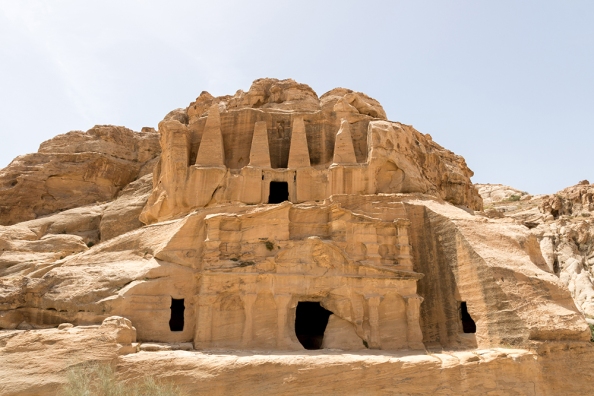 One of the first ruins along the trail

Although my energy was low, we had to keep moving continuously, because every time we tried to stop and rest in the shade, biting flies swarmed us.  This put us fairly far ahead of the rest of the Percussive Tours group who were following along with our guide.  Just when I was beginning to suspect that the Treasury wasn’t actually there, and we had instead fallen for some elaborate lie, we rounded a bend and the rose colored ruin peeked at us from between the canyon walls.

True to my expectations the Treasury was a masterpiece, and we happened to approach it at an opportune moment when there weren’t many other tourists nearby.

The scarcity of other tourists did, however, make us a target for the attention of some men trying to sell people “tours” to another viewpoint on a nearby clifftop.  We were approached so many times that we eventually relented.  By then, Caleb, Bonnie, and David had caught up to us and they joined us for the hike.  Although tiring because of the heat, the uphill slog wasn’t nearly as treacherous as the men had implied, and it didn’t take long to reach the top, where there was a little tea shop set up in a tent.

The view of the treasury from above was excellent.

By the time we returned to the Siq, the Percussive group was ready to turn around and leave, but we had driven separately from them in our rental car because we were planning to camp in the desert that night.  We said our goodbyes, and decided to stay at Petra a bit longer.

The five of us slowly made our way through another canyon that we knew would eventually lead to the city’s amphitheater.  Vendors were set up all along the trail, and in stark contrast to the ones in Egypt, none of them made any special effort to try to sell us anything.  We did stop in one booth to watch a man who was making sand art inside of glass bottles.  He created desert scenes depicting camels and the buildings of Petra silhouetted against colorful backgrounds.  His prices were reasonable, so we all ended up buying something from him by the end of our visit.

Also along the canyon were various dwellings carved into the rock.  We ducked inside a couple to check them out and see if they would provide any relief from the heat, but the air was more stifling inside.

When we did finally make it to the amphitheater (a short walk by normal standards), I felt completely exhausted.  At that point I knew it was more than just the heat because the others were still interested in poking around and exploring, and I couldn’t seem to muster the energy to go on.  I snapped a few unenthusiastic photos of the amphitheater, and then just found a shady place to sit while everyone else explored it more thoroughly.

I was starting to feel worse rather than better, so we went in search of a shop that sold water.  We found one nearby and I purchased a liter of water and tried to choke down as much as I could manage.  Luckily, the tent we had ended up in had a plethora of kittens milling about, and they were able to distract me from feeling lightheaded until I finally felt like I could start the hike back through the Siq.

I know we barely scratched the surface of what Petra has to offer, and I am still somewhat disappointed in myself for not trying harder to push through my illness to explore more while we were there.  The ruins that we did see were stunning, but I think I would like to return someday and give it another try under hopefully better circumstances.

Thankfully, our trip to Petra wasn’t the last thing on the agenda for the day.  After eating some lunch (and managing to keep it down) and getting a rest in the car, I was feeling a lot better when we arrived at Wadi Rum.  I had arranged for the five of us to stay in a Bedouin camp in the desert, and had been communicating with our host, Mohammed to arrange for him to pick us up at the park entrance.

When we entered the park, we were stopped a couple of times by rangers who let us pass after we told them what camp we were staying at.  We drove into a parking lot in Wadi Rum village and got out to wait for Mohammed.  My texts didn’t get through to him at first, so we wandered around for a little bit, finding a pair of downright adorable puppies to play with.

Eventually I was able to make contact with Mohammed, and he came to pick us up in a truck.  He stopped and bought us a case of water, and then made another stop to buy us some sweet juice drinks. Then he aimed the truck into the desert, the five of us riding in the bed.

Wadi Rum seemed like the surface of Mars with its jagged, red rock formations rising from flat desert sand.  The breeze from riding in the back of the truck was an incredible relief from the heat, and I was feeling much better.  Suddenly, something went flying from the back of the truck, and Caleb gasped in horror.

He had been reaching into his pocket and somehow managed to dislodge his wallet and send it tumbling into the desert.  Slips of paper that were surely Jordanian Dinar were scattering across the sand, blown by a warm breeze as we pulled farther away from the wallet.

Vince had the wherewithal to yell into the cab for Mohammed to stop driving, and when we explained that Caleb had dropped his wallet, the man exclaimed “You lost your money?!” and immediately backed the truck up at full speed.  When we reached the wallet, we all jumped into the sand and began chasing slips of paper.  Luckily the ones we had seen flying were receipts, and not bills.  Caleb’s cash was safely recovered, and we got a really stellar view while we were stopped.

Soon after the wallet escapade, we arrived at our camp which was nestled in between tall rock formations.  Mohammed let us pick our tents, and then said he would return during dinner to plan the next morning’s tour with us.  In the meantime we should explore the area and watch sunset.

We dropped off our bags in our tents, then made our way to a large tent that was used for meals.  There we met the camp cook, Omar, and one other traveller, Anna, who was staying at the camp.  We got to talking over some tea, and then decided to all go out and climb up a nearby cliff to get a view of our surroundings.  I ditched my sandals, which were crusty with salt from the dead sea, in favor of going barefoot in the soft, pink sand.

It turned out we couldn’t have asked for a more beautiful spot to camp.  We were fenced in by interesting rock formations on all sides, which added to the feeling of solitude that the desert already provided.  For the first time on the trip, I had the feeling of being alone, and I greatly appreciated how dead quiet the camp was.

As the sun began to set, we all scattered.  Vince, Bonnie, and David ran off to climb some rocks, Anna walked away to sit in the sand, and Caleb and I found some huge beetles and followed them as they searched for scrubby plants to nibble.  All the while, the sky was changing, casting a peaceful glow across our valley.

We all regrouped as the last rays of sunlight dipped below a distant crag, and we slowly meandered back to camp were Omar had dinner waiting for us.  It was a selection of food that we’d grown very familiar with over the course of the trip-pitas which could be spread with hummus and tahini, and a few hot dishes, including some delicious veggie options.  Mohammed returned with his fiancé while we were eating and we arranged a tour with him for the next morning.

The craziest thing about the Bedouin camp experience was the price.  I had booked it through Airbnb, and was only charged eighteen dollars total.  That meant that all five of us were getting lodging, transportation, and two meals for $3.60 a person.  I knew that the tour would be what cost the most money, but I didn’t know exactly what the price would be.  After Mohammed outlined the details of the tour, he ended with, “Okay, it will be a thousand dollars.”

We all paused for a second before realizing he was kidding, then we had a good laugh and Mohammed said, “I’m joking, it’s twenty a person.”  While it was the biggest expense of our Wadi Rum adventure, I still couldn’t quite believe that we were getting such an insanely cool experience for around the same price of seeing a movie back home.

We all retired to our tents shortly after dinner, heeding warnings from Omar about keeping our shoes inside to avoid foxes stealing them, and using a flashlight outdoors so as not to accidentally run into snakes.  I fell asleep almost immediately since the quiet desert was so peaceful, and I was so tired.  It had been an exhausting, but truly special day, and I was looking forward to what the next morning would bring. 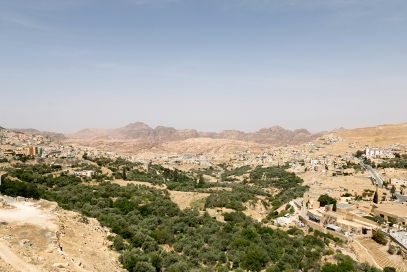 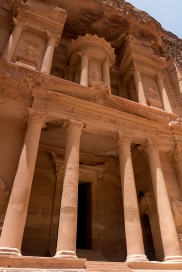 Me and Vince above the treasury

Donkeys in front of some ruins 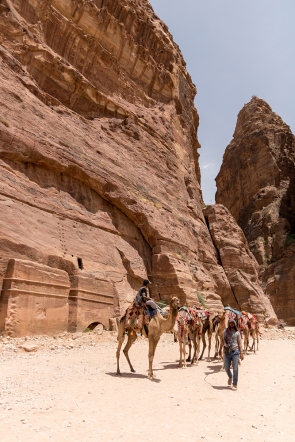 Caleb, me, and Vince on our way to camp

Our tents for the night

The view from inside the dining room 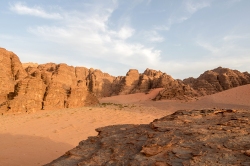 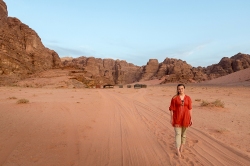 Exploring the desert around camp