“With trembling hands, I made a tiny breach in the upper left hand corner… widening the hole a little, I inserted the candle and peered in… at first I could see nothing, the hot air escaping from the chamber causing the candle to flicker. Presently, details of the room emerged slowly from the mist, strange animals, statues and gold – everywhere the glint of gold. For the moment – an eternity it must have seemed to the others standing by – I was struck dumb with amazement, and when Lord Carnarvon, unable to stand in suspense any longer, inquired anxiously “Can you see anything?”, it was all I could do to get out the words “Yes, wonderful things.”

During the summer of 2015 I was working at my city’s natural history museum, and we were preparing to host a temporary exhibit entitled “The Discovery of King Tut.”  It was our most anticipated exhibition of the year and came with a massive amount of planning and fanfare.  The exhibit was comprised of over a thousand replicas of the treasures that Howard Carter discovered in the tomb of Tutankhamun in 1922.

The exhibit turned out to be a huge hit and we saw a spike in visitors to the museum, many of whom mentioned to me that they had seen the real artifacts when they had traveled to Egypt.  Every time a customer said this to me I was overcome with a longing to travel the world and see fantastic things for myself instead of just reading about them.

Four years later, I found myself at the Egyptian Museum in Cairo, standing amongst King Tut’s treasures, somewhere I never truly expected to be.

The museum was hot and crowded, and filled to the brim with the most fantastic artifacts I have ever seen in my life.  Every turn revealed some ancient treasure to examine.  They were so numerous that it seemed the museum had given up on labeling many of them, opting instead to display artifacts of less significance in out-of-the way rooms that most tourists probably skip.  King Tut’s treasures were among the most opulent the museum had on display.

Everything from his tomb was impeccably well-preserved, and many of the items were gilded with a warm, glowing gold.  It was a completely different experience seeing these items in person versus seeing replicas of them.  The exhibit at my hometown museum had been somber and reverent.  People passed through it quietly, immersing themselves in the experience.  In contrast, the actual artifacts are surrounded by a constant loud frenzy of tour groups.  People hover around display cases, trying to crowd each other out of the way.  The objects themselves however, far outshine their replicas.  There is an ancient and storied quality to them that simply can’t be duplicated.  It was hard to believe that after those months spent with replicas of Tutankhamen’s treasures, I was finally surrounded by the real things.

After our Egyptologist guide had taken us through the main museum, he gave us an opportunity to buy tickets for the mummy rooms.  I was unsure if I wanted to spend the extra cash, but then I heard that the mummy rooms are air conditioned and I was sold.  About seven of us opted to go into the extra exhibit, and I was not sorry about my decision.  Photography is not allowed in the mummy exhibit so I left my camera with Vince and went inside with my brother, Caleb and some of our friends from the Percussive group.

The mummy rooms hosted many of the great pharaohs of Egypt, including Ramses II, Seti I, and a woman thought to be Hatshepsut.  I have seen mummies on display before, but the ones in Cairo are much better preserved.  I was particularly interested in some unconventional mummification techniques like stuffing the eye sockets with onions.  Overall, I was glad that I paid the extra money to see the exhibit.

We had managed to spend over half of our day at the Egyptian museum, but we were far from done touring.  Our next stop was the Citadel of Saladin, a hilltop fortification and home of the Muhammad Ali Mosque.

The mosque was the most spectacular sight in the citadel, with its shining domed roof and towering spires.  We spent a long time admiring its exterior architecture.  The heat on top of the hill was made bearable by a nice breeze as we slowly wandered toward the mosque and then into its courtyard.

We removed our shoes and went inside to find even more jaw-droppingly intricate architecture.

Hundreds of lights hung from the domed ceiling and caused the room to glow.  I stared up at the detailed above me in awe as our guide spoke to us about the mosque.

When we finally emerged back into the bright daylight, we were met with a sprawling, panoramic view of old Cairo.

We could even see the pyramids on the horizon.

Soon we were being ushered back to the bus.  There was still one stop left for the day.  Our driver expertly steered the giant tour bus into the heart of the city, where we had free time to roam around a bustling market.

I love going to local markets when we travel, and this was probably the most exciting one I’ve ever experienced.  The items on display ranged from cheap souvenirs to glinting metal lanterns to delicious smelling spices.  The streets were crowded with people and they buzzed with energy as the city prepared to break its Ramadan fast in a few hours.

Vince, Caleb, and I lost the rest of the group, but we enjoyed wandering around and haggling for souvenirs until it was time to meet back at the bus.  It had been another long and exciting day in Cairo, and I was thoroughly ready for a swim in our hotel’s pool and an early bedtime.

The Egyptian Museum in Cairo

Artifacts in the Egyptian Museum

A mummy in the Egyptian Museum

A kitten in the Egytian Museum 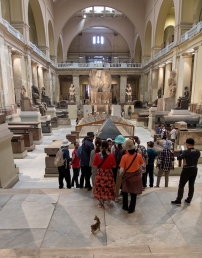 A kitten follows visitors in the Egyptian Museum 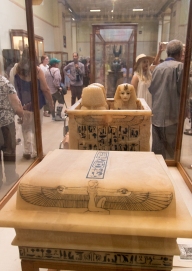 Papyrus in the Egyptian Museum 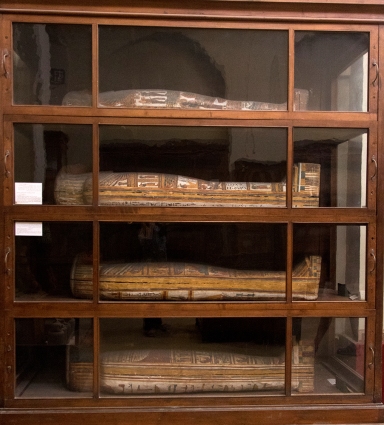 Coffins in the Egyptian Museum

Papyrus in the Egyptian Museum

A cat in the Citadel of Saladin 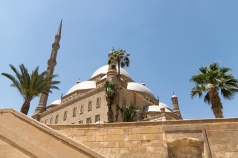 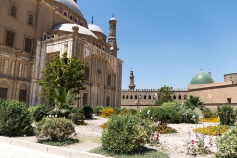 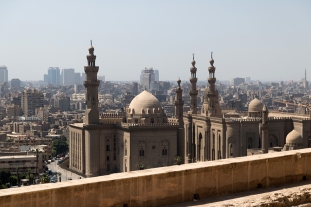 Caleb, me, and Vince over looking Cairo 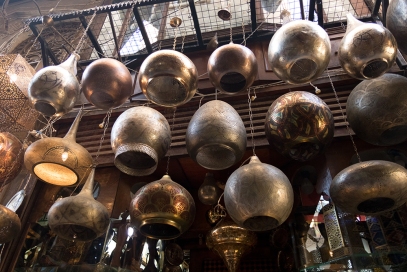 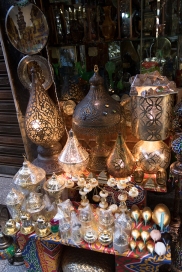