“Oh! They’re brittle stars, Vince!”  I exclaimed as we puzzled at a hoard of strange, tentacles waving in a shallow tide pool.

“I can tell because of that one,” I replied as though that were a perfectly thorough explanation.  What I meant of course, was that I had just gotten my first glimpse of the back of one of the enigmatic creatures, and could identify it as a brittle star by both its patterning, and its circular body with thin, spiny legs.

Although my explanation was less than informative, Vince uttered an agreeable, “Oh,” as though I had just given a ground-breaking lecture on echinoderms, and we continued watching the stars in fascination.

It was low tide at Pantai Tampah, the first stop on a day-long beach hopping tour that would eventually land us at the beach the Are Goling surfers had recommended.  I am a bit obsessed with sea creatures, big and small, so Pantai Tampah was nothing short of delightful for me.  When we first set foot on the beach I noticed the sand.  It was very soft and was formed into almost perfect, porous, little spheres.  After examining the particles I started to notice shells, then oddly shaped sand dollars and huge sea urchins.  I can spend hours just poking around in a pile of sand on a beach, looking at everything that has washed ashore.

Vince was doing a good job of humoring this habit as I followed a trail of dead urchins, stopping to examine their spines every so often.  Eventually I looked up for long enough to notice a rocky tide pool on the shoreline.

I looked at Vince and he seemed to be thinking the same thing I was.  We strolled over to the pool and began hopping around on jagged, slippery rocks, looking for anything of interest in the water below.  That’s when we saw the strange tentacles of the brittle stars, wiggling about as a gentle current rocked the pool.

We watched the stars until the tide came up high enough that our bridge of rocks was quickly disappearing, then we hopped back to the comfortable sand and returned to our scooter.  It was time to get back on the road.

We didn’t have any particular plan for our next destination, but after riding for a half hour we crested a hill and saw a gorgeous beach, bathed in sunlight far off in the distance.

This seemed as good a destination as any, so we headed downhill, searching for any place where it looked like we could access the beach.  At first we didn’t find anything, so we turned around and doubled back.  A woman on a scooter pulled up alongside us and asked what we were looking for.  Vince pulled the scooter the side of the road where another woman, wielding a blunt-edged knife in one hand and a half-carved cantaloupe in the other, joined our conversation.

The women pointed down the road, and described a spot where we could access the beach, the second one gesticulating enthusiastically with the hand that brandished her knife as cantaloupe juice dripped from the blade.  The pair gushed about how beautiful the beach was so we thanked them and took their advice, driving away in the direction they had indicated.

There was a weathered sign for the beach exactly where the women had described, and we turned onto a narrow dirt road that dead-ended at the ocean.  This spot looked like it was pulled directly from a postcard.  What’s more, the sunny strip of coast was completely deserted, save for a local combing the beach.  There were a couple of huts that looked like they were normally snack stands, but they too were empty, presumably because there weren’t enough tourists around to warrant keeping them running.

This was also our first sighting of a beach swing.  Investigate vacationing in Indonesia anywhere online, and you are bound to encounter dozens of pictures of people on swings.

The day had grown warm and sunny since our last stop, so we spent a bit of time sunbathing before moving on.  We had a long drive before our main destination, Mekaki Beach.

The driving from this point on got a little strange.  Like the previous day, we were still sort of a spectacle.  Almost every person we passed (and there were a lot of people) waved at us, and/or yelled something.  Some sounded friendly, some sounded decidedly less than friendly.  The people who didn’t wave or yell, still unabashedly stared at us.  Flocks of children yelled and waved as we drove by them, some even chased us down the road.  There were lots of beautiful vistas along our route, but we decided again and again to not stop because we felt so weird about all of the attention we were attracting.

Eventually the villages began to thin out, and mosques that dotted the roadside started to give way to Hindu temples.  Then the temples also became infrequent, replaced by unexpected luxury resorts.  We were witnessing what the surfers had told us about the night before.  They had told us that the son of the former president of Indonesia had bought up a huge slice of the southwest side of Lombok and was selling it off and developing it.  A massive highway that cut through the mountains was under construction, making it easier to access that part of the island, and resorts were popping up left and right.  For now, the area is still relatively deserted, but people are expecting it to be the next Bali.

We took a wrong turn, or rather didn’t take a right turn, and wound up on the new highway overlooking the beach we wanted to find.

When the surfers described Mekaki to us, they made a big deal out of how deserted it was.  Only after driving around Lombok for two days, did Vince and I understand how significant that was.  There are little villages everywhere you go on the island, and you never really feel like you’re completely alone.  This was our first view of uncut forest with no houses or farmland, and the beach below looked wild and inviting.

The trip to the top of the hill had helped us get our bearings and we doubled back, this time taking a turn onto a classic torn-up dirt road which cut through the forest and down to a pristine, empty beach.

Our feet sank into soft sand as massive waves broke along the shore.  Vince and I walked Mekaki beach until we found a large section with a wider strip of sand, protected by stands of trees on either side, and backed by a slow moving river.

I examined seashells along the way, and we discovered an old, abandoned jukung.

We stopped at the large section of beach and laid out for a while, feeling rather relieved to be someplace where no one was yelling or staring at us.

The area was very peaceful and it was easy to see why it was up-and-coming.  It was clear that we were witnessing this beautiful spot on the brink of major change.  I imagine ten years from now Mekaki will be on a lot of tourists’ radars, but for now it is still a bit of a secret, and easily one of the most clean and relaxing beaches on Lombok.

We opted to take the new highway on our return trip to Are Goling.  This was the best road we drove on during our time in Indonesia, that is, until we got to the unfinished part.  Once we reached the end of the pavement, it was easier to take the scooter off road and ride the sandy shoulder than it was to stay on the fresh gravel that was being laid down.

It may have been a bumpy ride, but the mountain views made up for it.

We made it back to Are Goling for dinner, planning to rise early the next morning so we could cross the bay below the bungalows and reach the little island just offshore.

Vince on the beach swing 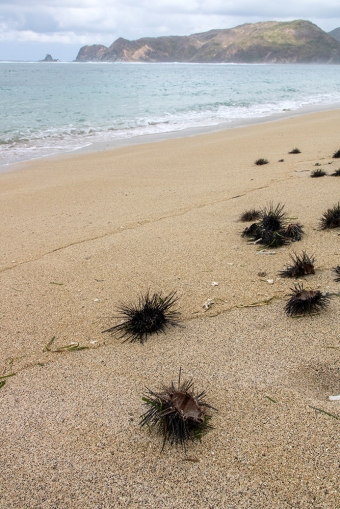 A trail of washed-up sea urchins

A view from the new highway

Deserted stands on the beach 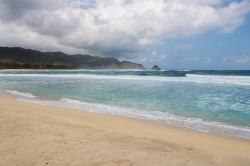 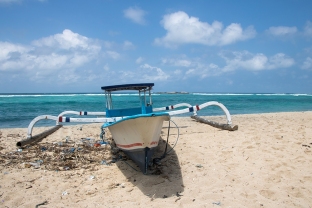 A vibrant jukung echos the colors of the turquoise waters