Seal Lullaby
Oh! Hush thee, my baby, the night is behind us
And black are the waters that sparkled so green
The moon, o’er the combers, looks downward to find us
At rest in the hollows that rustle between
Where billow meets billow, then soft be thy pillow
Oh weary wee flipperling, curl at thy ease
The storm shall not wake thee, nor shark overtake thee
Asleep in the arms of the slow swinging seas!
-Rudyard Kipling

Our last morning Cape Town started early in the breakfast room of the Signal Hill Lodge where we watched the most colorful sunrise we had seen on the trip.

We were up early again because we wanted to be the first ones at Kirstenbosch Botanical Garden when it opened, so we ate quickly and then loaded up the cars.   We had Rachel with us instead of Jess, who was doing a hop-on hop-off tour in the morning and meeting up with us around noon.  The parking lot was almost empty upon our arrival at Kirstenbosch, and there was no line for admission so we were inside enjoying the impeccably maintained gardens within minutes.  Morning was a beautiful time to be there because the warm light of the low hanging sun cast an ethereal glow over the hills, and the lighting was perfect for floral photography.

Our first point of interest was the Instagram-worthy tree canopy walk.

After that, we wandered around a bit aimlessly, stopping to look at various flowers (particularly the protea flowers), and being thoroughly impressed with the garden’s immaculate groundskeeping.

Bonnie mentioned a waterfall she had read about, so we hiked into the Skeleton Gorge in search of it.  The trail was mostly uphill, and it followed a stream that ended at a cliff where water was trickling down.  The water and stones cooled the air around us, a welcome relief from the mounting heat of the morning.  The falls weren’t raging yet as it was only the beginning of winter, but they were pretty nonetheless.

We hiked back downhill and spent some more time wandering the gardens, and climbing up into inviting trees.  I particularly enjoyed the fragrance garden, an area where the plants all have strong scents.  Around this time, Rachel parted ways with us to get to her next activity.

It was now late morning, and we made our way over to the Moyo Restaurant where we enjoyed a relaxing and delicious lunch overlooking the gardens.  Then we headed back to the parking where Jess was waiting to meet up with us for the drive to Hout Bay where we had scheduled a seal snorkel.

The drive to Hout Bay was gorgeous.  The route we took meandered along a twisted road lined with gargantuan trees, and eventually opened to stunning coastal vistas.  As we neared the Bay, the first thing we noticed was a horrendous odor that smelled fishy, but was so pungent that it couldn’t possibly have been just from the fishing boats out in the bay.  I wondered aloud if the people who lived here were used to the smell, but I didn’t see how that could be possible either.  We ended up learning from our snorkeling guide that the odor was caused by a fishmeal factory, and that residents of the bay were as affected by the smell as you would expect, some reporting nausea, headaches, and eye irritation.

Our tour was with Cape Town Bucket List, a company that boasts the lowest price of any seal snorkeling tour in Cape Town.  I am pleased to say that their low prices did not have a negative affect on the quality of their service.  The crew helped us get fitted with wetsuits, which were considerably thicker than the ones we had worn on our shark dive,to accommodate the colder water in the Cape Town area.  Once we were all suited up, a guide offered to take a group photo for us.

Then he told us to do a goofy shot, which is apparently not a collective skill of ours.

The crew gave us a quick safety briefing about the excursion and then we boarded a small, inflatable boat and were cruising through the bay in no time.  The boat ride was very short; no more than ten minutes had passed before we could see Duiker Island (also known as Seal Island) and a multitude of seals basking on its rocky shore.

In no time, we were jumping into the frigid water.  Once again I was pleasantly surprised with how tolerable the wetsuit made the water temperature.  Cold was the last thing on my mind as I began paddling toward the island, keeping a lookout for seals in the water below me.  We were above a lush kelp forest that swayed gently in a dreamy dance with beams of otherworldly light that filtered through the blue water.

I lost track of the others fairly quickly.  It was impossible to tell anyone apart in the wetsuits anyway, so I just made sure to look up every once and a while to check that I hadn’t drifted too far away from the boat.

My first seal was a bit of a surprise.  Of course I was aware that the seals were out there, but I have only ever seen them on land where their grace and agility leave something to be desired.  The nimble, twisting, whirlwind of an animal that approached me before disappearing into the water’s distant haze was a stark contrast to the heaving blubbery mass that seals are when they are land-bound.

I floated around, interacting with the playful seals for about an hour before we had to get back on the boat.  This experience was one of a childlike, unadulterated joy.  It was my favorite single activity of the entire trip, and a couple of others from the group voiced the same sentiment.  I will gladly snorkel with seals again in the future whenever the opportunity presents itself.

Once our time was up, the crew helped us back into the boat where they handed out cookies and hot chocolate for the short ride back to the bay.  Once we were dried off and changed, we split up for the rest of the day.  Vince, Jess, Bonnie and David went on a tour of one of the nearby townships, while Caleb, Jordi, and I went to return Brandon’s camera.  The Cape Town office of Caleb’s company is in Muizenberg, which is a well-known beach town, so while Caleb did a short training, Jordi and I drove to the coast for one last glimpse of the ocean.

We combed for interesting seashells amid washed up pieces of kelp as I began to lament the fact that the trip was so close to over.  I was also becoming acutely aware that I was about to get on a plane, and would not have an opportunity to wash the salt and grime from the seal snorkel off of me until we reached Grand Rapids in over 24 hours.  My hair swirled around my face in a tangled, salty mess as if to echo my sentiments.

Soon, Caleb texted that he was ready to go and we reluctantly got back in the car to pick him up.  The three of us drove back to Cape Town where we dropped off the rental car (the car company was not pleased with how much dust it had gathered in Cederberg), and selected a pizza place for our last meal in Africa.  The pizza was quite good, and we got to have one last milk shake (we had grown accustomed to getting the inexpensive shakes with almost every meal by that point).  After dinner, we met the Percussive group back at the Signal Hill Lodge where we shared stories of our last day until a charter bus arrived to take us to the airport.  Vince, Jess, Bonnie, and David made it back just as the rest of us were boarding the bus, and I ribbed Vince (good-naturedly) for his tardiness.

The trip was officially over, and I was definitely not ready to leave.  This ended up ranking among my top favorite vacations, and I will cherish the memories I made in South Africa for years to come.

A video to sum up our amazing trip: 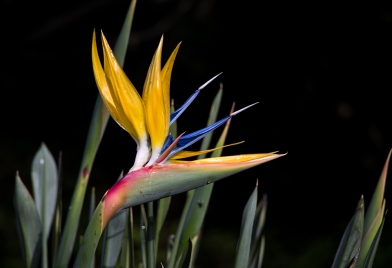 Caleb pretending to be a leopard

Caleb in a tree

Me in a tree

Sunrise from the Signal Hill Lodge 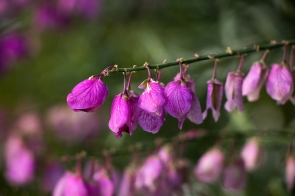 A dead jellyfish on the beach

A glossy ibis in Kirstenbosch