Dust settled around our two rental cars as we stopped at a crossroads to touch base with each other.  We had been driving up and down hills on a seemingly endless dirt road for what felt like hours.  As the cloud cleared we rolled down our windows, to confirm with the other car that we had the directions right.  A sign on the roadside warned us that we were entering leopard territory.  We hadn’t seen a building in at least an hour and the only signs of life had been a herd of goats a few miles back and a couple of motorcyclists dressed like they were ready for the apocalypse.  Still this seemed to be the right path, so we rolled the windows back up and pressed on.

I secretly hoped that this journey would be worth it.  I was the one who had discovered the Stadsaal Caves during my research about South Africa, and I had specifically tried to undersell it to the rest of the Fasburg Seven.  The Stadsaal is a cave system in Cederberg, South Africa that boasts ancient cave paintings.  I discovered it while searching for caves in the Cape Town area, and I immediately knew that I was going to visit it.  The problem was that it was a three hour drive from Cape Town according to Google Maps, the mountainous dirt road was stretching the drive even longer than that.  Additionally, information about the area had been scant so I could not promise anyone that the drive would even be worth it.  For all I knew, we were about to waste an entire day of our vacation.  Although I wanted everyone to come with us, I certainly didn’t want to be blamed if the excursion was a flop so I did my best to scare people off a bit.   In the end Jess was the only person who opted to stay in Cape Town, so I was left fretting over how long the drive was taking and hoping that Stadsaal would be cool.

After another endless stretch of road with clouds of dust billowing around us, we saw an unbelievable sight.  There was a resort that looked like a desert oasis right on the side of the road.  Logically, I knew it was the Mount Ceder Guest Cottages, the place where we planned to buy permits for entering the caves, but it seemed more like a mythical utopia after spending hours looking at the barren landscape.  We pulled into its parking lot, and piled out of the tiny rental cars, stretching our legs before meandering into the hotel’s sizable, yet deserted restaurant.  The room was open and spacious with decor that rang of opulence, but clearly drew its inspiration from nature.  There was a large front desk where we enquired about the hiking permits and looked at a menu.  It was about lunch time, and we knew this would be our last chance at food for a while.

We opted to sit outside on a large deck overlooking the surrounding mountains.  There were a couple of guests out here talking in hushed tones, but the atmosphere was one of peace and tranquility, which was a much needed contrast to the bumpy car ride.  We ate, then purchased our permits and gathered some advice about what to do at the caves before reluctantly returning to the cars.

The hotel seemed to be a little farther than the halfway point from the beginning of the dirt road so there was still a ways to drive, but I felt refreshed and relaxed after our lunch, and now I was getting excited to see the caves.  We finally came to a locked gate.  The code to unlock it had come with the permit fee, so Vince got out and opened it for us.  It was a short drive to a car park from there, and we were already starting to see interesting rock formations.  Nothing like this had been visible from the road so I was beyond relieved that there was actually something out there.

The cave art was very close to the first parking lot we encountered, and there was not much else to check out in that area.  We hiked up to the largest rock formation in sight, and could see the perfectly maintained painting.  It was spectacular in an understated way.  The painting was small compared to the massive rocks that were its canvas, but standing there quietly looking at it, I was awed to think that people had stood in this exact spot a thousand years ago, and had chosen to express their world through art.

After checking out the painting, we drove down the road a little further to another parking lot.  This was the spot to access the main cave, and when we got out of the car we immediately scattered.  Everyone had their climbing shoes out now, but my first concern was photography.  Caleb and I poked around, following a ways behind David who had already donned his climbing shoes.  Caleb was intent on finding more rock art, and I was intent on finding the perfect shot.  I was the one who ended up getting my way.  The first formation we scrambled up yielded a view of a delicate double arch that put me to mind of Utah (a place I have yet to visit).

We kept wandering and the scrambling became precarious enough that I thought it was worth it to change into my climbing shoes.  Eventually we made it into the main cave where we found Jordi.  By this time we had lost David, but we could hear his voice mingling with Bonnie and Vince’s somewhere back in the direction we had come from.  It was easy to get turned around in the maze of towering rocks and tunnels, and even easier to get separated from each other.

The main cave held its own rock art, although it was more recent than the ancient painting we had seen before.  Many people have signed their names on the large walls, including the farmers who used to own the land, and apparently members of the National Party (the now disbanded political party that was responsible for Apartheid), who used to use the cave as a meeting place (according to SA-Venues.com).

After that, I managed to lose track of Caleb and Jordi, and I poked around alone, taking pictures and creating some bouldering projects for myself.  I was struck by the fact that we hadn’t encountered any other people at all.  There we were in a pristine wilderness, surrounded by rock formations that would be crawling with tourists back in the US, and we had it all to ourselves.  It isn’t too often that I get to experience someplace as remote and quiet as Stadsaal, and I kept taking the time to appreciate the almost eerie lack of sound as I wandered. 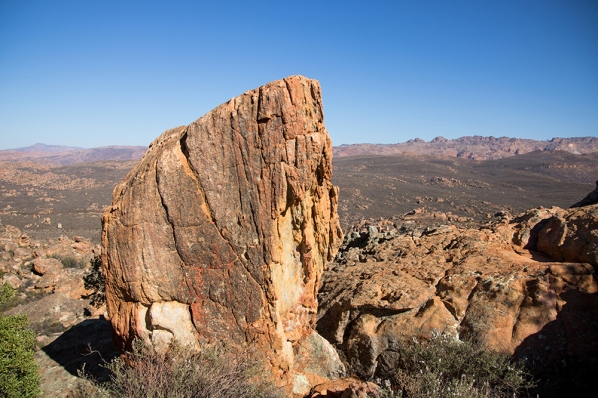 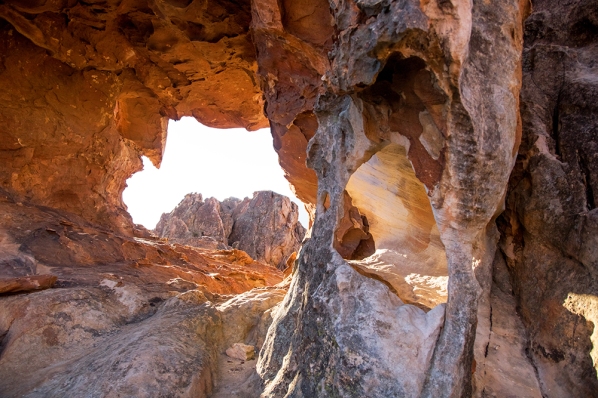 Eventually I ran into Vince, and joined up with him, Bonnie, and David to free solo the tallest cliff in the area.  The climbing was very easy with large textured holds that were perfect for us since we didn’t have any gear other than shoes and chalk.  It was a fast climb despite its height, and from the top we could see Jordi piloting his drone from the summit of another cliff.  I also caught a glimpse of Caleb, who I hadn’t seen in a while, wandering around below us, still searching for more rock art.

After descending from the cliff, we gather the rest of the group and we all decided to climb another one of the taller cliffs together.  This climb required some chimney climbing (any crack that is big enough to fit your whole body in).  This is one of my favorite styles of climbing, so I was thrilled to get to practice it outdoors.  On the way up, we noticed heaps of dassie scat, along with enough leopard droppings to confirm that we were indeed in leopard country and we probably shouldn’t be out after dark.

It was getting late by the time we made it to the top of this cliff so we posed for a group picture, and then began our descent.

By the time we reached the bottom of the climb the heat of the day was melting away, and the shadows of the rocks were getting longer because of the angle of the sunlight.  We hiked back toward the car park, encountering more leopard scat, and a perfect feline paw print along the way.  It was definitely time for us to get out of there and make the long drive back to Cape Town, but we were all happy with our experience at the Stadsaal, and I was relieved that the excursion had been a success.

The dry landscape of the drive to Stadsaal

Caleb on top of the cliff 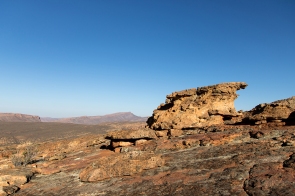 Vince and David after free climbing a pillar 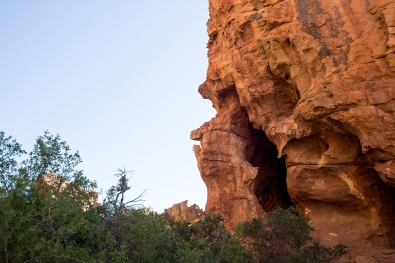