“We came suddenly upon a basin of boiling sulphur springs…boiling like a cauldron, throwing water and fearful volumes of…vapor higher than our heads.  The spring lying to the east of this, more diabolical in appearance, filled with a hot brownish substance of the consistency of mucilage, is in constant noisy ebullition, emitting fumes of villainous odor.”

Early explorers of the Yellowstone area recounted dramatic descriptions of a beautiful, yet unsettling landscape of tumultuous geothermal features which to some seemed straight out of hell.  These stories were met with blatant disbelief at first, but as more people traveled westward, more yarns were spun.  Some travelers were in complete awe of the natural beauty of the caldera, and others were shocked and frightened by the terrific forces at work in the earth under their feet.

Overlooking the mirage-like Porcelain Basin from above, it was easy to relate to these early travelers.  Below me was a sight unlike anything else I have ever seen, so simultaneously beautiful and bizarre that it was almost incomprehensible.  But to start this story, I need to rewind a few hours to the morning of my family’s second day in Yellowstone.

We were in a rush reentering the park because we didn’t have a campsite booked, and after a long process of waiting at the Norris campground office to claim a site, I was going stir-crazy.  I was ready to get out and explore, but logistics were taking too long.  After we finally booked a site, my brothers and dad wanted to stay at the campground and fish in a nearby river.  The group ended up splitting in half, with Vince, my mom, and I opting to explore the nearby Norris Geyser Basin while everyone else hung back to fly fish.

I somehow missed the Norris Basin while planning the trip itinerary, so I had no idea of what to expect when we hit the trail that looped around the back basin.  I did know that I was excited to at last be free from the confines of the RV, and stretching my legs in our country’s first national park.  We descended through a young jack pine forest, and it wasn’t long before we started to see interesting geothermal features.

We passed a couple of steaming turquoise hot springs, and we saw our first active geyser of the trip, steamboat geyser, which was churning up steam and hot water in pulsing intervals.

At this point our trio was interested enough in the landscape that we decided to continue on and take the longer loop around the back basin, despite worries that our fishing family would end up waiting around for us.  We pressed onward, passing fathomless pools, and strangely colored streams.  The terrain became very flat, and plumes of sulphuric steam sprawled across the wasteland in front of us.

One of my favorite features was the small, but active, Vixen Geyser. 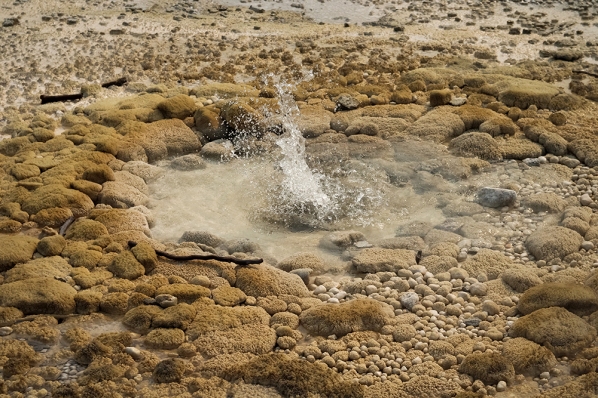 Our fascination with the basin only mounted as we hiked on past even more unearthly sights.

Having missed the Norris Basin in my research, I was unaware that we hadn’t yet reached its most spectacular sight, the Porcelain Basin.  As we finished up our hike of the back loop, we decided to keep going and take a look at the “other section” of the basin.  I was wholly unprepared for the grandeur that met me upon my first glimpse of the terrain.

The Porcelain Basin made everything we had seen up until that point seem utterly insignificant.  Rust orange, white, and pale blue swirled together like an impressionist had painted the land.  This was a place with so much beauty that I can’t find words to adequately describe the emotion I felt while experiencing it.  A feeling somewhat akin to longing for something unachievable settled in my gut.  I felt at once great joy, but also a strange and nonsensical sadness.  In reflecting on the hike, this dichotomy seems to echo the experiences of the early explorers.

We hiked along the boardwalk over colorful streams of water before hurrying back to the campground to meet up with the rest of the family.  We still had three more destinations to hit before sunset. 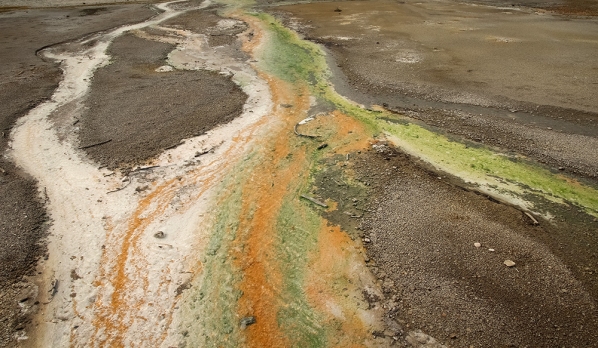 With the whole family regrouped, we pressed onward toward our next stop: Artist Paintpots.  Vince, Caleb, and I hit the trail at a brisk pace while the rest of the family lagged behind a bit.  The three of us were feeling the time pressure to get to Old Faithful before dark.  Although we reached the geothermal features first, our rush caused us to miss out on a spectacular coyote sighting, which my parents regaled to us once they caught up.  Apparently the coyote was standing on the edge of the parking lot and practically posed for them as they snapped a few pictures (we would see the animal at the end of our hike, but it was feeling much more shy by that time, and I only managed to snag a picture of its tail as it walked away).

We finished the Artist Paintpots loop fairly quickly.  The bubbling mud volcano was fun to watch, and the colorful hot springs were beautiful, but we knew we had to move on the Grand Prismatic. 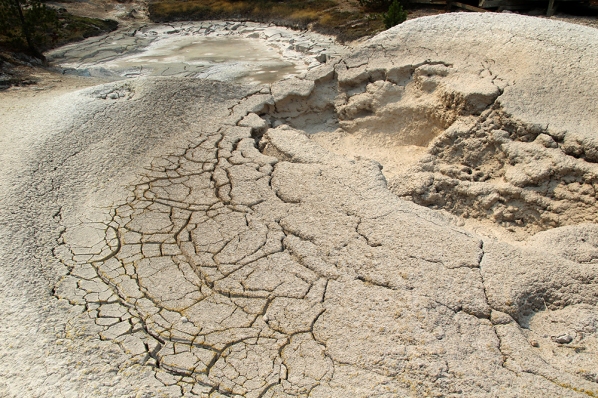 When we finally pulled up to the parking lot of the Grand Prismatic Spring, it was apparent that we would have to park along the side of the road and hike back.  The lot was filled to the brim with vehicles, including a few tour buses.  We found a space on the road and hoofed it back to the trailhead.  Our first view was of a steaming hot spring emptying itself into the Firehole River.  As we walked further, we found out that the spring was called Excelsior Geyser, and it used to be the largest geyser in the world with massive and frequent eruptions.

Beyond Excelsior, we could see Grand Prismatic’s colors gleaming in the afternoon sun.  We continued in its direction, weaving through throngs of visitors who were waving their selfie sticks around and causing other people to have to duck out of the way, or risk being pushed off of the safety of the boardwalk.  A bit of crowd anxiety started to creep up on me, but I pushed it away and focused my attention on the improbable sight that everyone was there to see:  the saturated hues of the microbial mat of Grand Prismatic.

I could have stayed and looked at the vibrant colors much longer, but we felt pressure to keep moving because of the crowd, so we finished up the short boardwalk loop, passing by Opal Pool and Turquoise Pool. 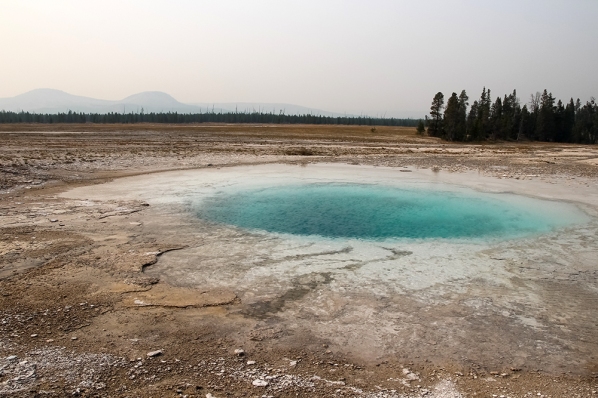 Next we made the short drive to Old Faithful Village where we promptly headed out to the viewing platform to wait for the famous geyser’s next eruption.  As we waited, we bantered while laughing at the antics of large Ravens that were hopping around, trying to charm food scraps away from uncooperative visitors.  There were surprisingly few other tourists around, especially when compared to the throngs we had experienced at Grand Prismatic.  A few pockets of people gathered around the viewing platform, with more showing up little by little.  The atmosphere, however, was reverent.  The platform remained quiet as the small crowd watched in anticipation.

After about a twenty minute wait, Old Faithful lived up to its name and shot water up into the sky.  For a brief moment, a faint rainbow appeared, but was soon gone.  The eruption continued for much longer than I expected and warmed the air around us so that the dusk, which was becoming chilly, suddenly felt balmy.  The geyser displaced so much liquid, that it created a large stream which flowed under the boardwalk where we were seated.

After the eruption, we broke out in applause.  We were all smiles as we retreated to the Old Faithful Inn and put our name in for a table at the Dining Room.  We then spent some time wandering the elaborate log structure until we were called in to eat.  All in all, it had been a spectacular day, and we still had one day left in Yellowstone ahead of us before moving south to the Tetons. 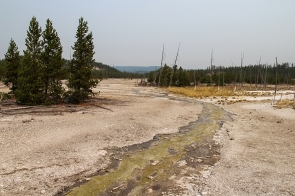 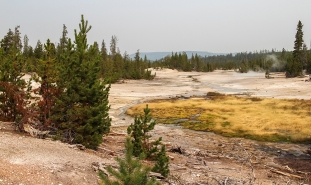 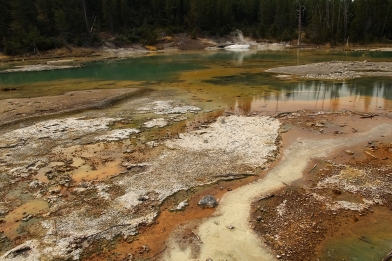 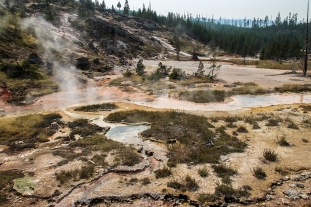