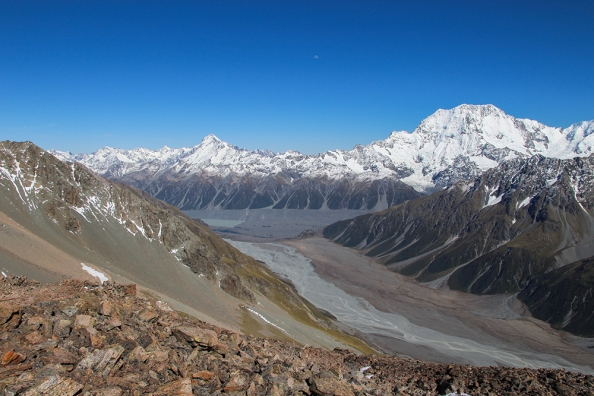 It was a sunny morning in Twizel, and we were feeling great after a breakfast of fresh eggs at our Airbnb.  We spontaneously decided that we wanted to add an unplanned activity to the full day I had scheduled in our itinerary, so we booked a morning helicopter ride to the mountains of Aoraki/Mount Cook National Park.  Then we made the 40 minute drive to the Mount Cook Airport, enjoying views of Lake Pukaki as the the snow peaked mountains in the distance grew closer.

We arrived at the airport early, and were able to take off ahead of schedule, which suited us well since we still had six hours of hikes planned for the rest of the day.  I had never been in a helicopter before, and I was surprised at how smooth the ride was.  It felt nothing like flying in a plane.

Our ride included a snow landing, and the pilot set us down on a patch of snow where we could walk out and enjoy a stunning view of the mountains on the other side of the valley.

The whole excursion only lasted 25 minutes, and although the views were incredible, we were left with the rather rotten feeling that our enjoyment of the tour did not justify the cost.  It came to around $400 USD for the pair of us, and in the end we felt that the views from hiking around the park were just as good as those from the top of the mountain, but didn’t have the hefty price tag attached.

As we attempted to come to terms with the amount of money we had just spent, we set out on our first hike of the day, Governor’s Bush Walk.  This was a short hike, about an hour return, that led uphill through a lush forest, and then back down until it met up with another trailhead at a beautiful turquoise colored river.

We diverged from the path and followed the river upstream a ways, hopping on boulders, before turning around and heading back toward the trailhead in Mount Cook Village.  After a quick stop in the visitor center to buy a map, we were on our way to our main walk of the day: the Hooker Valley Track.  This is a three hour hike that leads through the Hooker Valley until reaching a final viewpoint of Mount Cook and Hooker Glacier.

The Hooker Valley Track is the most popular short walk in the park, which was evidenced by a sharp increase in the number of people sharing the trail with us. The walking was easy, albeit hot, and we made good time on the trail, even with stops to marvel at the mountains that surrounded us. Being in the valley gave me a different sense of scale than standing high in the mountains had.  The tall peaks towering around me on all sides, rather than looming in the distance, left me feeling awestruck.

The walk included three swing bridges, the third of which was near the turn around point.

Once we were across the third bridge it didn’t take long to reach Hooker Lake, where Vince braved the frigid waters for the chance to stand on an iceberg.  After dipping my feet in the water, and finding it colder than Lake Superior (which is about my threshold for tolerating cold water), I chose to stay on shore and enjoy the unobstructed view of Mount Cook.

The return hike back to the car park felt like it flew by, and soon we were bound for our third and final walk of the day, the Tasman Glacier View Track.  We veered from the main track to see the blue lakes (more accurately described as green these days), but didn’t spend too much time there before ascending to the top of the trail for a view down at the Tasman Glacier and Lake.

We were about to backtrack and find the trail that led to the base of the lake, when we saw a girl strike out on her own down the rocky hill of glacial debris where we stood.  This route, although dotted with makeshift cairns, seemed treacherous in comparison to the groomed path, but we were ready for a little adventure.  We hopped and picked our way over boulders and up and down seemingly endless piles of stones, taking care not to step on any of the sparse vegetation as we went.  Eventually we made it all the way to down to the lake, which fed into the mouth of a river, and were rewarded with a spectacular view of icebergs floating in the white water.

At this point, the sun was quickly sinking behind one of the mountains, so we turned tail, taking the real trail back to our car.  This track yielded views of an infinite looking field covered in boulders left over from glacial movement, which reminded me a bit of Iceland (but much warmer).

We were weary, and completely satisfied as we drove back to Twizel for the night, our minds still swimming with all of the beauty we had witnessed in one day.